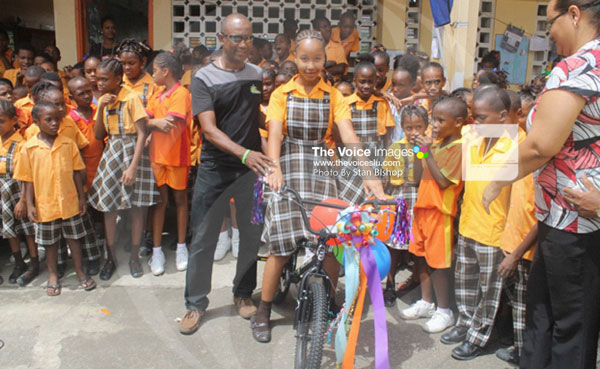 She scored an impressive 96.33% and will be attending the St. Joseph’s Convent in September.

“I feel excited and shocked,” Arielle told The VOICE on Tuesday. “I knew I would do well but never thought I would do that well.”

Arielle said she was inspired by previous students who topped the Common Entrance Examination, including students from her own Alma Mater.

The top student said she looks forward to keeping up good grades at her new school and making new friends. She also thanked her teachers and fellow students for encouraging her. While she has not decided what career path she wants to follow, Arielle said she has a strong passion for business.

Arielle’s Grade 6 teacher, Mavis Weekes, said Arielle was a straight-A student, noting that Arielle actually attained the same mark when she sat the mock Common Entrance Examination. She described Arielle as an intelligent student, an avid reader who is extremely disciplined and focussed.

“These are qualities she exhibited throughout regardless of what was going on around her,” Weekes said. “So I felt quite elated when I found out that she topped the island in Common Entrance. But I wasn’t surprised because she’s that kind of student. To me, it’s a great sendoff because I’m retiring.”

“They have been faithful in doing this for a number of years and it does serve as motivation for our children to do well,” Elliot said. “It also speaks to children being all-rounders; not only are they achieving academically, but also take part in sports or some form of exercise.”

Universal Cycle Centre representative, Guy Larcher, said the company takes pride in motivating and rewarding students for their hard work, adding that students who were successful in this year’s Common Entrance Examination can also take advantage of special offers now on a Universal Cycle Centre.

Arielle’s mother, Lesley Crane-Mitchell, was all smiles when The VOICE caught up with her at Tuesday’s presentation at Carmen Rene Memorial School. She said her daughter’s achievement caught the family by surprise. She said that while Arielle was expected to be among the top five performers, her consistent great performances and her teachers’ input paid off.

“Of course, we’re on Cloud 9 and very proud of her,” Crane-Mitchell said. “She has always been an excellent student from day one. We expected her to do well but never dreamed that she would do so well. So we’re simply elated. But it is testimony to all those persons who worked hard with her along with her own discipline.”

Crane-Mitchell said a combination of after-school programmes and the tremendous input from teachers also played a crucial role in Arielle’s success. She expressed thanks to all involved in her daughter’s development throughout her tenure there.

Arielle’s father, Nigel, too, did not muzzle his pride, saying Arielle is more of a teacher than a student at home.

“I’m proud. In fact, she’s had to teach me a thing or two whenever I try to help her with homework. I thought I was at the top of my game but there were a few particularly hard areas in mathematics where she actually sent us back to the drawing board,” Mitchell explained.

He said Arielle, who turns 12 later this month, is self-motivated and dedicates herself to her studies even without her parents’ prompting. There are some nights, he said, when she has to be told to close her books and go to bed.

Arielle’s younger sister, Amber, who also attends Carmen Rene Memorial School, will move up to Grade 4 in September. She said that while she’s proud of her sister’s achievement, the moment is a bittersweet one.

“I’m very sad because I will miss her at school,” Amber lamented. “Because she will be in secondary school, most of the time she will be studying.”

Also, only Districts 1, 2, 3 and 7 recorded a mean equal or greater than the national mean. The means for the island’s eight educational districts ranged from 57.11% to 66.21%.

Two thousand two hundred and fifty (2,250) students were assigned to 23 secondary schools, while 169 were unassigned. However, officials from the Ministry of Education held a special meeting at Castries Comprehensive Secondary School to assign a school to those who were unassigned.

Twelve hundred and seventy-three males and 1,146 females sat this year’s exams, with 592 boys scoring the national mean compared to 688 girls doing so and 1,176 boys and 1,074 girls being assigned.

The results indicate that compared to last year, there was an increase in the national mean performance in Mathematics and General Paper (from 59.81% to 60.98% and from 66.31% to 69.88% respectively). However, the national mean for English Language declined from 65.24% to 57.34% over the period under review.