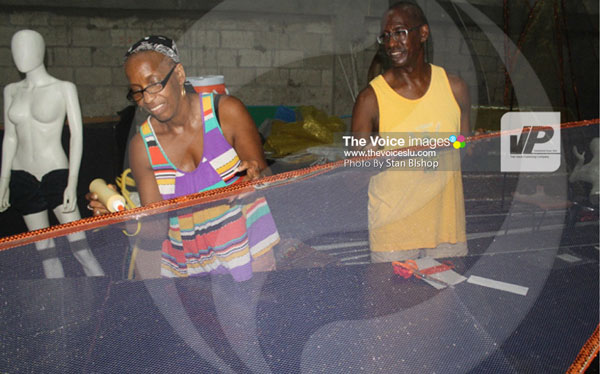 The Labours and Love in Costume–making

SINCE being formed last year, Tribe of Twel has proven to be a dominant force in the Carnival fray. ‘Twel’, the creole word for ‘cloth’, was borne out of unflattering comments made by many who often complained that Rituals Carnival Band used ‘twop twel’ (too much cloth) to make their costumes. It turns out that ‘Twel’ is cut from as different cloth among Carnival bands in more ways than one.

Tribe of Twel member, Adrian Augier, said when Rituals Carnival Band folded up after winning Band of the Year in the final three consecutive years of its existence, out of its ashes emerged the Tribe of Twel: Children of the One Cloth, formed by a group of likeminded carnival lovers.

Augier, who has been involved in mas to some degree since his teenage years, said that after returning to Saint Lucia from university at 22, he joined Royalites Carnival Band during one of its earlier incarnations. He also served as band leader for Rituals.

“Back then, you were responsible for your own costume, interpretation, creativity and sense of pride,” Augier said, recalling the earlier decades when costume-making was a favourite pastime. “All these qualities were pretty much in the costume you wore. It was not an off-the-shelf experience. So there was scope in the whole exercise for your own creativity.”

Despite the unflattering comments about Rituals Carnival Band’s sartorial qualities eventually coining the name of the new band, Augier said there’s a deeper issue that needs to be underscored.

“It’s sad because it speaks to people’s intolerance of anything that covers them,” Augier lamented. “Therefore, it makes it very difficult for them to play a theme because there’s just so much one can do to play a theme with a two-piece bikini and beautiful feathers. It pretty much follows the same formula every year. That’s why you see the big bands struggling to convince the public, the media and the judges that they in fact have a real portrayal.”

Augier said, Tribe of Twel is a small group of people who literally want to make mas and play it. While he was conciliatory about respecting people’s freedom to play mas however they liked, he said more emphasis needs to be placed on creating costumes locally.

“I find it difficult to celebrate my culture wearing something from China,” Augier said. “That’s a little incongruous for a young nation that’s 37 years old given the amazing level of creativity we have here. ‘Twel’ is about being robed, being adorned and being beautiful. It’s not a naked mas.”
Augier, one of the band’s designers, said a lot of love, time, sleepless nights, sweat, creativity and energy go into the costume-making process which results in the costumes eventually coming to life. That’s when the pride of accomplishment finally kicks in “because we know it’s part of us.”

Augier described the mas camp as “a communal centre”, a place where ideas come to life in a setting that spurs creativity and koudmain. The word ‘gatherings’ replaces ‘meetings’ and everyone brings something to the table, both creatively and as in eats and drinks. The creative juices for new concepts never end, so much so that the band already knows what they will be portraying next year.

The band won many titles last year despite having less than 100 revellers on the road. He said this proves that the criteria for success have nothing to do with size. Tribe of Twel will be portraying “Paradisio” this year, inspired by the third and final part of Dante’s “Divine Comedy”. ‘Paradiso’ is Italian for ‘paradise’ or ‘heaven’.

“We’ve interpreted it in many different ways but the primary manifestation is that it’s all about wings, the idea being the soul’s journey to joy and glory,” Augier said.

He told the story of a woman who came to the mas camp last year having done some research on costume-making. Despite having no prior experience in the craft, Augier said she was able to make her own costume at the mas camp. On Carnival Monday, she was celebrated by being featured prominently at the front of the band. Such is the joy, glory and achievement that Tribe of Twel wants to showcase, he said.

“We are one cloth woven together by that thing that binds us which is the making of the mas and taking great pride in both the making and wearing of it,” Augier explained. “We know who we are and what our product is. So we’re not trying to market this thing to 18- and 30-year-olds. We’re at the stage where we know what we want and what we want to do. Whoever gets it, gets it.”

Tribe of Twel, Augier said, is not a hierarchical group; everyone has an equal say and ideas are all welcome among members. The mas camp is also open to potential revellers who can join the ‘Twel’ tribe by visiting their Vide Boutielle location in the factory shell adjacent to the former NBL building.