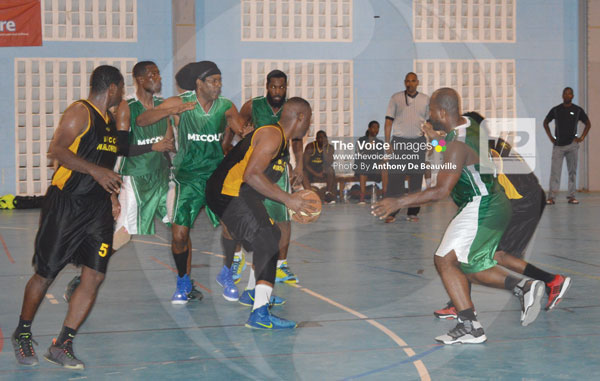 THE Royal St. Lucia Police Force has entered the danger zone, meaning that they must win this evening’s encounter against Run N’ Gun All Stars from Vieux Fort when the Basketball Federation’s Premier League tournament continues with semifinal Game No.2 at the Beausejour Indoor Facility.

Led by Kerlinus Auguste and Calious Dantes with 16 and 17 points respectively in Game 1 against the same team on Tuesday evening, the lawmen will have to search deep within if they are to force a Game 3 come Tuesday and to go on to secure a spot in the final.

The likes of Valentinus Edgar and Michael Flavien will have a big role to play as well, but they will have to contend with Curt Auguste, Gillan Auguste, Zephtan Fontelio, Shawn Auguste and Rakim Auguste who has showed great skill both in offensive and defensive on the square.

Meanwhile, on Tuesday evening VBCC Warlords secured the second final spot in the national league when they defeated a determined Micoud Hustlerz 74 – 70. VBCC at one time led by 15 points inside the third quarter with 5 minutes 34 seconds left on the clock, but Micoud Hustlerz showed good attacking form as VBCC for one reason or the other lost their offensive balance and concentration deep into the fourth quarter, giving Micoud Hustlerz every opportunity as they brought the game to a 3 point deficit with 45 seconds to play with.

At the end, the boys for the eastern village will have themselves to blame for squandering two free throws at a crucial time with 11 seconds and with the score card reading 73 – 70. VBCC too had their chances at the free throw line with 0.06 seconds left, but the experienced No.5 Jerry Charles could only muster one point to give his team the win 74 – 70.

VBCC will now have to lift their game and believe in themselves that they can win this championship that has eluded them for the last six years when they play defending champions Courts Jets in the final at a date to be announced by the SLBF.