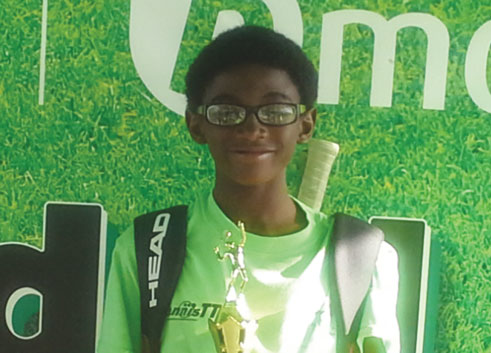 THE International Tennis Federation (ITF), through its Development Programme, keeps investing in and promoting tennis across the globe with positive results. The St. Lucia Tennis Association has been granted the opportunity to have one of its most talented tennis juniors be part of the under 13 ITF Travel Team for the Caribbean.

The 13 year old Aidan Bousquet, currently ranked No.6 in Central America and The Caribbean, has represented St. Lucia on many occasions and is one of four individuals on the team that will be touring the Caribbean region.

The team comprises two boys and two girls and will be coached by John Goede who is specially chosen by the ITF. Final team selections were made based on competitive performance and physical fitness which was measured through special tests stipulated by the ITF.

The Caribbean Team’s tour, which runs from June 24 to July 21, is being financed by the Grand Slam Development Fund. With the aim of raising the level of tennis worldwide and increasing the number of countries competing in mainstream international tennis, the Development Programme includes a broad range of initiatives in less developed countries ranging from the grass roots to Grand Slams.

Activities include ITF/GSDF touring teams, funding for junior and professional tournaments, training centres, coaches education, the supply of tennis equipment and the ITF Junior Tennis Initiative a 14 and under player development programme, which encompasses Tennis10s (School Tennis Initiative) and Performance Tennis Initiative programmes. Special emphasis has been placed on junior tennis where regional tournament circuits have been developed and teams of young players compete outside their own region.

The ITF Caribbean under 13 Team will compete in three COTECC tournaments in Aruba, Bahamas and the Dominican Republic. A training camp will be held during the final week of the tour. Bousquet coached locally by the redoubtable Vernon Lewis, left St.Lucia yesterday to begin his tennis journey.