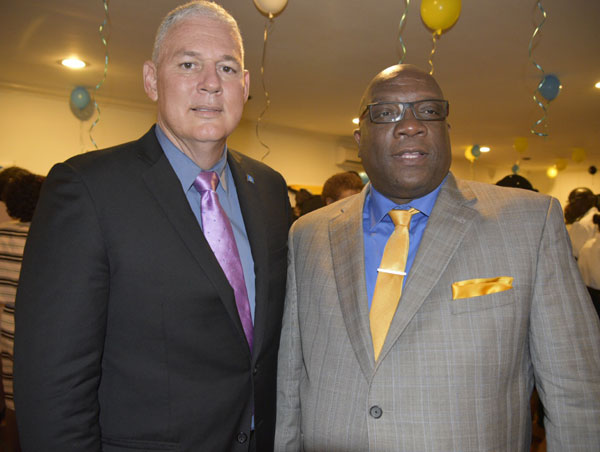 The departure from the usual custom of holding the ceremony at Government House was taken to reinforce the themes that the United Workers’ Party, led by Prime Minister Allen Chastanet, had campaigned on, specifically that opportunities would be created for all and the economy would be transformed.

According to the UWP, this economic transformation would be achieved, for instance, through the expansion of tourism in Vieux Fort, which has become plagued by rising crime and unemployment. The expansion plan would entail building a new cruise ship terminal in Vieux Fort, Chastanet has said and reiterated Tuesday at the swearing-in ceremony.

“I felt that it would have been wrong of us as a new government to forget where we came from,” Prime Minister Chastanet said. “We would all not be standing here today, taking the oath of allegiance to St. Lucia, if it were not for you, and I thank you. It was also important that this ceremony take place here in the South. The South has suffered for a very long time. It has the highest level of unemployment and the highest level of poverty, but yet the greatest opportunity for growth. I am here and my government is here to say to you that we see you, we hear you, we are with you, and we will make this thing change together.”

This people-centred philosophy – grounded in hope and change – is redolent of the statement that Prime Minister Harris of St. Kitts and Nevis gave on February 19, 2015, the day after he was sworn in as the country’s third Prime Minister.

“We always had contended that the people wanted change,” Dr. Harris said, adding that, “ultimately, the people delivered that in an overwhelming way. We have an agenda, which is people-centred, and we want the transition to be smooth and quick.”

Prime Minister Chastanet said Tuesday that, “we must try a new approach. Like the economic zones that we have outlined in our manifesto, we want to govern with a focus, so I hope that you recognize today that we have cut the number of Ministries from 14 to eight, and we have created clusters of teams to be able to focus and deal with the critical issues facing our country.”

He added: “I hope you also would have appreciated that the number one issue facing our country is unemployment. So we felt it was important to name my ministry the Ministry of Economic Growth and Job Creation.”

In relation to job creation, Prime Minister Harris said last summer that “there is an obvious need for business expansion so that decent jobs can be created in the economy to absorb the excess capacity in terms of the supply of labour. We must then work together so that the private sector can play the vital role of creating jobs, as job creation is one of the main drivers of economic growth.”

“Most heartening for us is that we are off to a good start in realizing the enhanced quality of life for all our people. Prosperity for all is a work in progress,” Prime Minister Harris added.