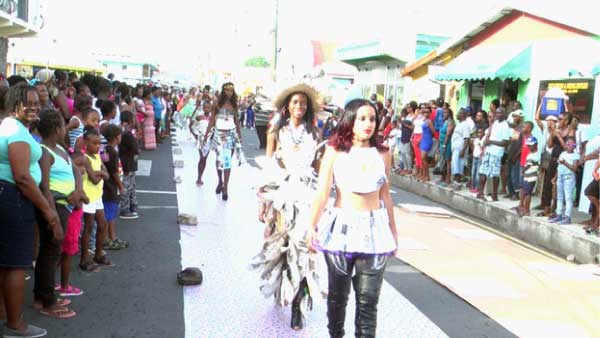 The event was a collaboration between the Vieux Fort community and the Cultural Development Foundation (CDF) and was part of the St. Lucia National Arts Festival. It was something special, it was an afternoon and early evening that will linger long in the memories of Vieux Fortians.

CDF’s roving team of street theatre actors treated the audience to two thrilling, spontaneous pieces of drama. The first called “The Bottle” arose from an argument between husband and wife over the need for their children to drink water. And the second, The “Chain,” began with a brother being accused of stealing his sister’s neck chain, but only for the blame to later shift to a neighbour accused of stealing and using the chain to cast obeah on the sister.

Under the afternoon light, Imani Models thrilled the audience with their paper wear collection where the outfits were entirely of paper, designed and created by the models themselves; and in the evening, under glowing spotlight, their Out of Africa collection, depicting African culture in modern day fashion, again designed by the models themselves, took the breath away, explaining why Imani Models are perennial performers at the St. Lucia Jazz & Arts Festival HOT COUTURE fashion show, one of the Caribbean’s premiere fashion displays. It seemed for this one afternoon and early evening, Vieux Fort became the center of world art, fashion and culture.

In between the theatre, dance, and fashion, a distinguished cast of poets, singers and musicians took the stage. Ally Kyatt, Vieux Fort’s folk hero and cult figure and St. Lucia’s dancehall King, mesmerized the audience with his compelling and infectious brew of creole, comedy, and grass roots culture. The great Itoobaa, whose 2001 award-winning album, “Freedom”, is perhaps the greatest reggae album produced in St. Lucia, treated the audience to his inspiring signature song, “Freedom”, the title track of the album. Multiple award-winning poet, Modeste Downes, honoured the audience with a humorous poem characterizing the coconut vendor, and with a second piece paying tribute to Rameau Poleon, St. Lucia’s most renowned violinist and folk musician. Steelpan soloist and arranger, Mc. Allister Hunt, gave a wonderful rendition of the national anthem on pan, followed by one of his delightful compositions. Adrian “Drii Notes” Klien, multiple award winning poet, hip-hop and gospel artists, did not disappoint with his poetic, hypnotic hip-hop piece. His brother, Alex “Sawlty” Klien, also an award winning singer and musician shared with the audience through his music a glimpse of his relationship with his God.

Some say Vieux Fortians don’t support their own; well the audience, both young and mature, who thronged the road strip, particular when the models were on, begged to differ.

To ensure that the event wasn’t just a spectator display, and to make sure the audience was cognizant of the fact that the event was part of the national arts festival, they were invited to paint a community art collage on two-feet square sheets of plywood. Well, the outcome of the collage painted by persons ages 5 and up would have made any visual artist proud. In the coming weeks the collage, which consists of about twenty conceivable masterpieces, will be displayed at a public space such as Vieux Fort’s Independence Square.

Earlier in the year several Vieux Fort groups met to discuss the notion of the town always hosting an activity to correspond with each national calendar event, with the hope of enriching the arts, cultural and social capital of Vieux Fort, strengthening it as a community, instilling confidence in the future of the town, and enabling residents to take pride and ownership of their community. The Street Theatre, Arts and Cultural Exposé was the outcome of that initiative and followed on the heels of the well-attended and highly praised Vieux Fort Nobel Laureate Literary Night held in January, which was a similarly motivated and collaborative effort among Vieux Fort groups and organizations and the National Nobel Laureate Committee.

The model or template that seems to be emerging to push Vieux Fort into the limelight, as exemplified by the staging of the Street Theatre, Arts and Cultural Exposé and the Vieux Fort Nobel Laureate Literary Night, is that community groups, with the help of the business sector and national government or quasi-government entities, need come together to stage events designed to entertain, educate and uplift the community.