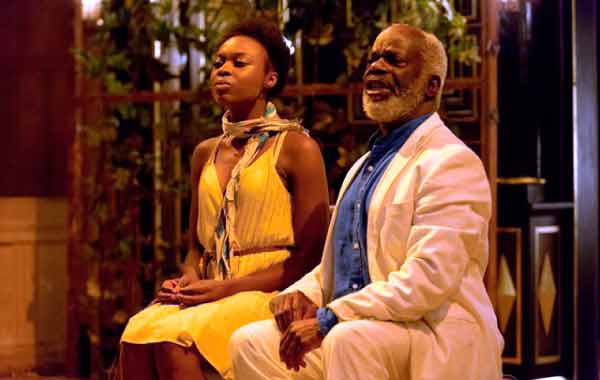 ON Tuesday May 3 and Wednesday May 4, “Omeros” came home to Saint Lucia.

The dramatised version of Walcott’s major, 325 page, book-length poem of the same name (1990), was presented by Shakespeare’s Globe Theatre. The venue was the National Cultural Centre. The two-actor masterpiece, and make no mistake, we watched a masterpiece of poetry and drama, featured St. Lucia’s Joseph Marcell and actress Joan Iyiola.

I say “Omeros” came home since the powerful descriptive-lyrical-narrative poetry of Sir Derek, set in Gros Islet, with iconic fishermen and villagers at the centre of the drama, resonated in St. Lucia, with St. Lucian audiences, in a way that is probably not possible in London or New York or other metropolitan centres. I would love to see this play put on in Gros Islet, in the open air, free of charge, to the public. It would have a liberating reception that would be unique. And I think that Walcott would feel a deep satisfaction that those of his home people for whom he writes recognised and received his work and portrayal of their lives, with a joy and satisfaction beyond real or imagined boundaries of class and education.

In case anyone had forgotten, we were reminded that Sir Derek Walcott, grown up on 17 Chaussee Road, is a major international poet. The “Omeros” poem /drama we witnessed showed a great and powerful imagination, an almost unbelievable skill with language, metaphor, image, ideas that compare with the great masters Shakespeare, Cervantes, Milton and others of that ilk. Walcott is a modern master (I state the obvious). He is a master of the English language, of Caribbean/St. Lucian idiom; he is a painter and playwright and theatre director, so the lines so exactly rendered by the fine actors (and they, Shakespearean actors are very fine actors) carry a power of description/narrative/lyrical beauty/humour/compassion that can move one to tears. I was so moved.

“Omeros” carries stories of love; death both natural and tragic; healing and reconciliation; fractures of history; and racial and historical reconciliations that are effected through vision and a kind of magical realism. And for those who were not there, these epical narratives are shouldered by two excellent actors, presenting/performing the verse poetry of Nobel laureate Walcott.

The central characters, presented through role changes of Marcell and Iyiola, are Helene, Achille, Hector, Philoctete, Ma Kilman, an English couple resident in St. Lucia (the unnamed but definite setting) Denis and Maude, Seven Seas. The beach on Gros Islet, the No Pain Cafe, bedrooms, the gommier forests are among the settings. And, forgive my repetition, but these are drawn through the verse and the actors’ presentation of these through their dramatisation.

In Joseph Marcell, Walcott has found the perfect Walcottian actor. I would like to see him do other Walcott creations, e.gMakak in “Dream in Monkey Mountain”, the devil/planter in “Ti Jean”, the schoolmaster in “Remembrance” and other now-famous Walcott creations. As well as doing readings of Walcott’s verse.

The director and adapter Bill Buckhurst deserves full credit for his faithful, empathetic, understanding, imaginative shaping and directing of “Omeros”. The original 325 page modern classic had to be framed in a two-hour drama. Choices had to be made (with the guidance of the poet/playwright) as to what of the comprehensive long poem would reflect its essence, its centrality. And they succeeded very well.

The set was simple, built on the floor in front of the NCC stage. A large straw mat was the performing space, two Japanese-type screens provided entrance to the performing area. On the stage, TayoAkinbode provided a percussive musical accompaniment that underscored, sensitively, the lines and moments. Candles in lanterns provided the illumination, subtly supported by regular theatre lighting. The designer was Anthony Lamble. An attractive programme came with the ticket.

Anything to carp about? Not really. One may be tempted to wish that the African Joan Iyiola could have produced a French Creole/Caribbean accent more strongly, but fine actress that she is, her strong and moving performance more than compensated, for what is after all, just an understandable desire for a complete St. Lucian accented sound in such a complete St. Lucian poetic drama.

Congratulations are in order to the organisers of the 25th anniversary of the Saint Lucia Jazz and Arts Festival 2016, who brought us this great Walcottian drama. And to the Globe theatre who have made St. Lucia a regular stop in their tours. They came in other years with “King Lear” (Joseph Marcell in the lead) and Hamlet.

My heart’s desire is that many more St. Lucians, and many more of those portrayed in Walcott’s great love and healing narrative (with all the pain involved,) could have experienced it.