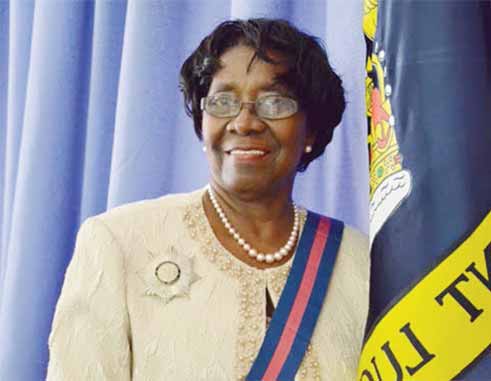 THE St Lucia government has promised to consider a fixed date for general elections here.

The promised was made by Governor General Dame PearletteLouisy opening a new session of the legislature on Tuesday.

The promise is in line with one of the recommendations of the Constitutional Review Commission whose report was debated in the parliament last year.

Interestingly, there was news from the camp of the opposition United Workers Party even before Dame Pearlette’s announcement, that that party too intended to legislate a fixed date for elections if elected to office.

The following is the second and final part of the Governor General’s Throne Speech:
BUILDING NATIONAL PRIDE
Mr President, Mr Speaker, building a society that is strong, resilient and ready to take on the world requires a people with conviction, imagination, and confidence. It requires citizens who are at peace with themselves and with each other. Put simply, the society must know itself. Building national pride, defining oneself is not an activity of vanity or parade. It is essential to building character and self-worth in our people. Each person must have sense of place, sense of self, sense of history, so that they may have sense of direction. In the triangulation of life, one must have these self-identifiers upon which we can take our mark along the journey.

The efforts of achieving this call for strong institutions which project the national patrimony, the national inheritance, and the positive culture of a people. It requires building an image with a mix of inward and outward perspectives. It is an exercise in learning, and relearning, in discovering and rediscovering, in defining and redefining.

We have seen efforts in this regard take form over the past few years in the areas of cultural and heritage development. We can now sing in our own mother-tongue, our national anthem. We are projecting confidence and vigour in embracing our Kwéyòl language. Through the expression of film such as produced by Kendal John, we are discovering who we are.

My Government is committed to improving the infrastructure available for productions and development of the Creative Industries. It will, in the coming year, pursue the efforts that are underway to establish a national complex for the development of culture and the performing arts. It is time that our artistes are given a home. We will deepen consultation on this to ensure that this new National Cultural Centre will meet the requirements of the current and future practitioners and institutions who will make use of it.

Just last week, through the Saint Lucia National Trust, a national dialogue commenced at the Folk Research Centre on fashioning a National Museum System. To support these efforts, my Government has vested the property known as the Married Women’s Quarters at Vigie for the purpose of supporting the National Museum. It is way beyond time for our children to learn their culture and history.

It is anticipated that legislation establishing the University College will be laid before this Honourable House during the 2016-2017 academic year to enable the first entrants to register in August 2017 for the institution’s own Bachelor’s Degree in Business, Education, Humanities, Social Sciences and Nursing. It will of course take a few years for the institution to be fully established as it consolidates its programme offerings and improves the quality and level of its administrative structure, its physical plant, its staffing and support services. The cost of operating an institution of that nature will be significant. The College is in the process of restructuring its operational and financial management systems to meet these needs, but collectively we as a community will need to determine how these future costs will be met.

REVIEW OF THE REVISED TREATY OF CHAGUARAMAS
Mr President, Mr Speaker, I now turn to one regional matter that Saint Lucia will place on its agenda in the coming months.
Saint Lucia, in common with other Caribbean States, committed on July 05, 2001 to the “Revised Treaty of Chaguaramas Establishing the Caribbean Community Including the CARICOM Single Market and Economy.” Since the signing of the Revised Treaty, the world has changed dramatically. The world that we knew is, frankly, no more.

At the heart of the arrangements governing trade in our region is what has been described as a “Common External Tariff”. This tariff is essentially a legally binding agreement to allow all member states to impose identical or uniform rates of duty on items imported from outside of the community that is, from third countries, in a bid to protect regional domestic production and trade within the Community.

My Government believes that the time has come to review the Common External Tariff to determine whether protection should continue to be available to some products manufactured in our region. Saint Lucia cannot continue to protect some regional products to the detriment of its people. My Government is also of the view that the rates of duty ascribed to some products need to be revised and that greater flexibility should be given to member states in adjusting rates of duty on certain products in periods of economic stress or adjustment.

My Government hopes to place these issues on the agenda of the appropriate and relevant institutions of CARICOM in the coming weeks, as part of the review of the Common External Tariff scheduled to start by July this year.

OTHER LEGISLATIVE MEASURES
Mr President, Mr Speaker, it will be observed that My Government has not, so far, announced new legislative measures or intentions for this new session of Parliament. Honourable Members will undoubtedly agree that the legislative plate of the Drafting Department of the Attorney General’s Chambers is filled with proposed legislative measures from previous Throne Speeches delivered to this Chamber. In any event, with General Elections on the horizon, the Government elected by the common will of the people will have the opportunity to offer to the nation its legislative agenda on the opening of the new Parliament after General Elections.

FIXED DATE FOR GENERAL ELECTIONS
Mr President, Mr Speaker, I commenced this address by referring to electoral matters. It is fitting that I come to a close on that subject.

It cannot have gone unnoticed that with each passing electoral cycle, political campaigning to remain in office or be elected to office seems to commence far ahead of the eventual dissolution of Parliament. The uncertainty over election dates does not fully explain this phenomenon but it can also encourage it. Some have argued that the system is manifestly unfair as the incumbent party has the advantage of surprise. These days, that argument can hardly stand scrutiny as electoral preparations have become rather public.

There can be no doubt that impending elections can add to uncertainty and indecision by investors, domestic or foreign. Investors often prefer to wait on the outcome of General Elections to make investment decisions. Of course, it does not follow that if fixed election dates are introduced the tendency to early campaigning for General Elections will cease. But the argument about “fairness” cannot be totally dismissed.

It was once thought that fixed election dates were inconsistent with the parliamentary system of governance that we inherited from Westminster. This view has now been discarded, by none other than the United Kingdom Parliament; the cradle of Westminster conventions and practices. That country’s parliament has now enacted what it has described as a “Fixed-term Parliaments Act.”

My Government has noted this development with considerable interest and will also consider the enactment of legislation to introduce fixed election dates.

CONCLUSION: A JOURNEY
TOGETHER
Mr President, Mr Speaker, in proroguing one session of parliament and opening a new session, we signal that we commence another chapter of our journey in our lives together, as a nation and as a people.

One of our distinguished poets, Adrian Augier reminds us that,

“The eventual journey of our lives together should be more than a trip, a passage, a mere physical movement through space and changing times. It must also be a spiritual movement, gathering experience, growing in knowledge, acquiring new wisdom and understanding.

As a nation, our collective journey is a process of advancement toward our full potential. Such is the insistence of our motto: The Land, The People, The Light. Such is our statement of ascending faith, of abiding confidence, of determination that we should always rise, aspire, and journey forward and upward toward enlightenment.”

As we stand in tribute to our island, let us, as Adrian says,
“seek out the very best in ourselves and in our neighbour, to acknowledge our progress as one people, as a nation in the world of nations, and in so doing, shine our light so bright that it sustains us in this moment and serve to inspire all coming generations.”

Mr President, Mr Speaker, Members of Parliament, Ladies and Gentlemen, on that note and with the poignant and touching words of Adrian Augier resonating in our minds, it is now my pleasure to formally declare open this Sixth Session of the Tenth Parliament of Saint Lucia.