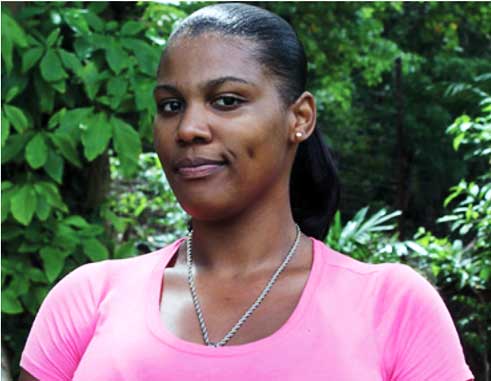 Taking Her Talent To The Soca Stage.

SOME years ago, Shanice William adopted the pseudonym “Flawless” after someone heard her singing and remarked that her voice was, well, flawless. Whether or not that was all the motivation she needed at the time, William has kept both the name and passion for music all these years.

The 23-year-old Bois Den resident started singing around age 6 and after graduating from Vide Boutielle Secondary School at 15, began writing her own songs. Using a small room in her home as a studio, Flawless was able to produce her songs, later releasing them on Facebook for fans to feast on.

In fact, during a July 2010 interview, she spoke to me about the “endless positive feedback” she was receiving at the time from her fans who just could not comprehend that the self-described introvert packed a musical punch. At the time, one of her popular songs, “Hold Yuh (One Man Mi She)”, which sampled Jamaican artiste Gyptian’s hit, “Hold Yuh”, was sending Facebook residents crazy.

But as flawless as her fans thought she was back then, Flawless explained in that interview that she was not about to rest on her laurels and allow the overnight fame to ruin the ultimate dream of staying the musical course. She seemed fixed then on becoming the next dancehall/hip hop artiste as a one-song-at-a-time approach.

Many of her dozen songs were already being churned out by the then teenager, too, at karaoke joints since her stage fright got the better of her. Those songs included “Make Me Sweat”, “9-10”, “Baby I Know”, “I Wanna Give You”, “Forever In Love”, “All Alone” and “Never Got The Chance To Say”.

But when the singer/songwriter sat down with me recently, it was to announce to her fans that she had finally decided to enter the soca arena this year by joining the Take Over Tent. While she will be singing groovy soca for now, she plans to take up the party soca genre in the future.

Flawless, who usually performs rhythm & blues, dancehall and reggae, is currently making plans to shoot her first music video for her latest groovy soca, “Saint Lucia Tings Nice”, which was recently released on Blazin FM. As such, she is seeking corporate sponsorship in order to make the project a reality.

“The song has been getting a lot of positive feedback, especially via Facebook,” Flawless said. “I’ve also been performing it at various places, mainly at karaoke events in my Bois Den community. I even walk around with my boom box playing the song.”

She added: “The song speaks about Saint Lucia and our heritage. In it, I talk about the island having pieces of other Caribbean islands in it. I think it has Road March potential.”

The young artiste’s latest offering comes after a few years’ hiatus from music during which the pressures of eking out a living took precedence over pursuing personal ambitions. She described the road back from her musical recovery as a difficult journey but one that also inspired her to become stronger.

“I gave up on music for a while,” Flawless said. “After I started working in the hotel sector, I lost my passion for music. But this year I heard a beat by Ransom Records from Anse La Raye who sent it to me. The beat got to me immediately and I wrote lyrics to it that same day, recording it two days later.”

Flawless said her entry into the soca arena is also about proving that Saint Lucia has way more female soca artistes than people actually get to see showcased. She adds that she intends to leave an indelible mark on the competitive soca scene.

“I’m very nervous about competing this year. But I’m also a bit excited. I’ve been rehearsing every day in preparation for the season. So I’m hoping for a great season,” Flawless explained.

If you wish to make a contribution to make Flawless’s music video, contact her via Facebook (Shanice William) or by calling 721 5545.