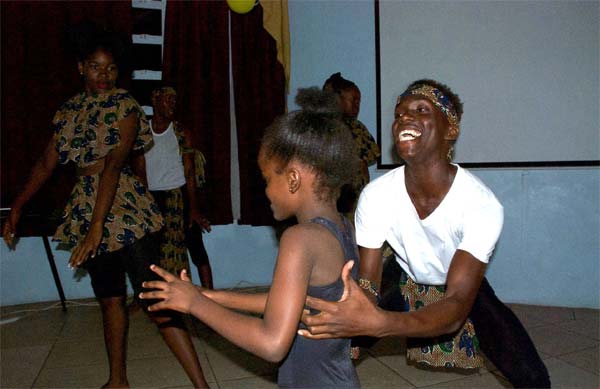 THE Vieux Fort Nobel Laureate Literary Night was a great success; over a hundred persons attended. Some persons had to turn away because all seats had been taken.

On the night, the art of Jonathan Gladding, Lesley Lubin, and Janice Samuel was on display; so were the books of ModesteDownes, JolienHarmsen, Clive Sankardyal, and Laureate Derek Walcott.

There were performances by the Augier Combined School and the Micoud Secondary School. N’Vogue presented a dance called “A City’s Death by Fire.” There was a video presentation of the Nobel Laureates, musical performances by Ally Kyatt, Itoobaa, and Adrian Klien; folk drumming by TanbouMele, storytelling by Sylvester “Wasi” Flood, and the premiere of a poetry video of “Phases”, ModesteDownes’ epic poem tracing the history of Vieux Fort.

In terms of audience applause, N’Vogue and Adrian Klien were the standouts.

And to the performers, MCs, Imani Models, volunteers from Volunteer St. Lucia Vieux Fort Chapter, volunteers from the Augier Combined School, and NSDC staff, all of whom participated at no fee, we say “a hearty thank you for without you the event could not have happened. But we reserve our biggest thanks to the audience who came out to support and help us celebrate our Nobel Laureates in over capacity numbers, making a lie of the cliché that Vieux Fortians don’t support their own.”

Above all, we want to say this: that good things can happen in Vieux Fort, and good things have been happening in Vieux Fort. However, more good things need to be happening in Vieux Fort, and in a more consistent fashion. So what does it take? Well, take the Literary Night, for example. How did it happen? A few of us responded to a call to let us try to always have an activity in Vieux Fort to match the national calendar of events. That was late November last year. The rationale being that the consistent hosting of such activities will help strengthen Vieux Fort as a community, instil confidence in the future of the town, and enable residents to take pride and ownership of their community.

The suggestion came too late for us to stage Vieux Fort activities for National Day and New Year’s, so we targeted Nobel Laureate Week as the first event to roll out the notion of having an activity in Vieux Fort to match each of the national calendar events. Hence the Vieux Fort Nobel Laureate Literary Night. As part of that thinking, for Independence STDC will be hosting an International Food Fair and Banana Festival at the Philip Marcellin Grounds on February 21. In addition, STDC is giving support to the St. Lucia Motor Racing Association and the Vieux Fort Horse Racing Committee to stage racing events in Vieux Fort as part of independence celebrations. And so we intend to proceed. Easter next, then the St. Lucia Jazz and Art Festival, and so on.

The Literary Night happened because a few persons (five to be exact) came together to make it happen and then solicited the participation of other persons and the broader community. By participation I mean the performers, the sponsors, the volunteers, and the audience. We all played a part.