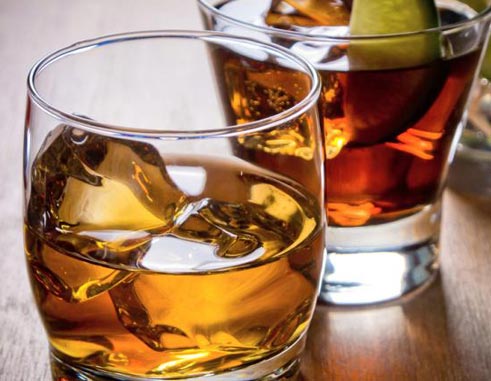 LONDON– You can’t open a newspaper at this time of year without reading a story about moderate alcohol consumption being good or bad for you, or making no difference at all. And now there are new government guidelines which reduce what were previously regarded as “safe” levels.

The new guidelines recommend, whether you are a man or a woman, drinking no more than 14 units a week and say it is best to spread those units over the week rather than binge. But they also recommend “several” alcohol-free days a week.

I am particularly interested in alcohol at the moment as I have just embarked on a Dry January i.e trying to avoid all alcohol for a month. It started badly when I had a drink on New Year’s Day (there were extenuating circumstances) but I have done well since then.

The reason I’m doing Dry January is partly to see what effects it will have on my biochemistry (I’ve done a range of blood tests) but mainly because I want to see if I can do it.

But what are the risks and benefits of alcohol? When I was at medical school I was taught that there is a U-shaped curve when it comes to drinking. Non-drinkers and people who drink more than 2-3 units a day were said to be at greater risk of heart disease (and therefore risk of premature death) than people who were moderate drinkers. As a moderate drinker I found this very encouraging.

Unfortunately many researchers now dispute that claim. For the latest series of “Trust Me I’m a Doctor” I interviewed experts with competing views about the alleged benefits of alcohol.

First up was Prof Tim Stockwell, director of the Centre for Addiction Research at the University of Victoria in Canada. He has advised several governments, including our own, on alcohol guidelines and thinks there are no biochemical benefits to drinking (though he concedes moderate drinking can be sociable, and beneficial in that way).

“There’s 60 different ways at least that alcohol can make you unwell or kill you,” he told me over a glass of water. “It’s not just the obvious things like liver disease. A man drinking three to four units a day increases his risk of developing prostate cancer by 23%. Alcohol, at whatever level, raises a woman’s risk of breast cancer. There’d be 10% fewer deaths from breast cancer worldwide if there was no drinking.”

He thinks that the studies which suggest that moderate drinking is protective are flawed. He says the problem is that people who don’t drink at all tend to include former alcoholics and people who are in poor health, and that skews the apparent benefits of moderate drinking.

He concedes that having a couple of drinks twice a week is unlikely to do much harm, but recommends “abstinent days, abstinent months, and if you actually don’t miss the stuff, abstinent years.”

The other expert I interviewed, Dr Alexander Jones, a consultant cardiologist and clinical scientist at University College London, agrees that alcohol raises your risk of a wide range of cancers but believes there is decent evidence that alcohol can be beneficial for the heart, at least in relatively low doses.

“Heavy drinkers,” he told me, “have a much higher risk of developing heart disease than non-drinkers, but there are large prospective studies involving thousands of people in different parts of the world which show that if you drink modest amounts of alcohol, up to say two units of alcohol a day, then you are less likely to develop coronary heart disease or stroke later on in life.”

He thinks it may be because alcohol promotes the production of nitric oxide, a compound that makes the arteries in the body dilate. This would reduce stress on the heart and improve its oxygen supply.

But today’s government report downplays the potential benefits of alcohol, stating that “the net protective effect that may be attributable to drinking regularly at low levels appears to be significant only for women aged 55+ (with men aged over 55+ showing a protective effect of negligible size)”.

Quite apart from the continuing debate about the benefits or otherwise of alcohol, part of the problem with alcohol guidelines is that most of us have no real idea exactly what an alcohol unit is. A pint of strong lager can contain twice the alcohol units of a normal lager. Wine comes in different strengths. Certainly compared with some of the other health messages like “don’t smoke”, or “eat five a day’, following the new guidelines is not going to be easy for people when they are going out to a bar or the pub.

The advantage of Dry January, however, is that for me this is not going to be a problem for the next three weeks. A glass of fizzy water is both alcohol and calorie-free.