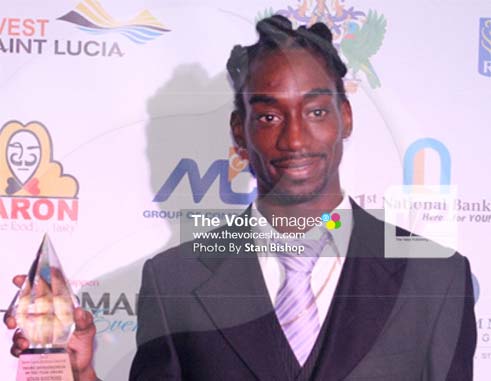 The Rise (And Trials) Of Keran Rosemond.

IT took Keran Rosemond just under a minute to get on stage at this year’s St. Lucia Business Awards to accept his Award for Young Entrepreneur of the Year. But that short walk to the stage was filled with many mixed emotions: reflections about all the hard work, determination and a young man’s dream to be successful, different and, most importantly, inspirational.

The life of this 23-year-old entrepreneur is one filled with hope, promise and success. He has beaten the odds by defying the near-50% unemployment rate among youths in Saint Lucia by oiling the wheels to what might well become a business empire.

Rosemond, who lives in Ciceron, attended Gros Islet Secondary School, graduating in 2010. In 2011, while doing a Carpentry and Joinery course at Sir Arthur Lewis Community College (SALCC), Rosemond would often go to the Vigie Airport and spend hours there just watching planes land and take off.

Having always wanted to become an aviator, he quit SALCC after two semesters and boarded a flight to Barbados where he landed a job at Grantley Adams International Airport changing brake pads on planes.

After four months in Barbados, Rosemond returned to Saint Lucia and decided to start his own business. His brother sold his car and they both went into business ordering shoes online and selling them for a profit. That business soon tanked and Rosemond later got a job as a taxi driver.

In 2014, Rosemond began working on a cruise ship as a galley staff after signing up with local recruiting agency, MAMPA. Realizing that the pressures of the job were too much for him, he quit after just one month and returned home.

Rosemond said that having seen his mother, Sylvia Alice Rosemond, make pepper sauce for years, he read up quite a bit about how to start a business with the hope of one day packaging and marketing pepper sauce himself.

He sent samples of the pepper sauce he prepared to Miami for testing but got some discouraging replies. That’s when he contacted the Saint Lucia Bureau of Standards (SLBS) and asked for advice about his new idea: producing virgin coconut oil.

Last May, with the advice he received from SLBS, Rosemond began producing virgin coconut oil soon, selling his bottled products to gift shops at Pointe Seraphine, the Castries Market and the Vendors Arcade.

Realizing that he needed to expand, he soon got a health licence and revamped his Ciceron operation. Local supermarket chain, Super J, was soon added to his customer list, as were some of the island’s other supermarkets and leading hotels.

The small businessman said things took a turn for the better when he received a call from an official from the National Initiative to Create Employment (NICE) programme requesting that he meet with Venezuelan president, Nicolas Maduro, who was scheduled to visit Saint Lucia last October.

A few days before the president’s visit, Venezuela’s Ambassador to Saint Lucia, LeiffEscalona, paid a visit to Rosemond’s small operations at Ciceron, where he and two of his employees produce the now-famed Ali Rose Virgin Coconut Oil. The ambassador, he said, was impressed and he presented her with a few bottles of his product.

Rosemond currently purchases coconuts from farmers to produce his prize-winning product that now comes in three bottle sizes: 5-ounce, 8-ounce and 12-ounce. When he started out, he said, the coconuts had to be grated by hand. Today, the job is done by a special machine that shreds an average of 300 coconuts per day. With the increased scale of operation he expects to realize soon, he’s already putting plans in place to import coconuts from Guyana to overcome the scarce supply locally.

The chance to meet Prime Minister Dr. Kenny Anthony and President Maduro at the Prime Minister’s residence, Rosemond said, was humbling. He said both leaders wished him well in his future business exploits.

Long before Rosemond even got into the coconut oil business, he appeared in a short video about the coconut oil industry in Soufriere. Fortuitously, it turns out that art has evolved into life which now has him building on the increasing prospects he sought during those days he spent sitting at the airport watching his life float by.

Rosemond said the virgin coconut oil can be used for three main purposes: for cooking, medicinal and applying to the skin as a moisturizer.

The name of his product was coined from his mother’s name whom, he said, has been as encouraging to him as his aunt, Theresa Edwin, and his father, Nicolas Pierre Joseph.

It’s been a hard struggle from where Rosemond started, especially when one considers that in order to do the required research on his product before getting into business, he had to “steal Wi-Fi” from his neighbours while sitting under banana trees for hours on his phone because he did not own a laptop.

But it’s even harder when he had to muster the fortitude to take that short walk last Saturday evening to receive the award he shares with fellow nominee, Mandisa Morrison, of Shoe Rehab, and give his thank-you speech, one of the most poignant on the night. But Rosemond is already used to challenges and works hard at overcoming them.

“I just had so many flashbacks at the time,” Rosemond told me about his walk to the stage. “I remembered those images of my parents helping out in my factory. It was truly about them really.”

“One of the things I really wanted to do with my business was to have people not look at Ciceron as a bad community but that there are many good things that come out of my community. Right now, people can feel that they can come to Ciceron to do business.”

Rosemond said he is open to investors becoming part of his business, especially since he plans to take the business up a few notches and raise much-needed capital. He also wants to employ other young people with idle hands to keep them off the block.

“I plan to create more jobs for people because I know how it is,” Rosemond said. “However, it took me just under a year to have a successful business. So I think it’s possible that people can start their own businesses rather than seeking a job.”

For now, Rosemond, who had dreams of flying a plane now hopes that the bottles of his virgin coconut oil fly off the shelves and into households as he keeps chasing his Saint Lucia dream of flying high in business.