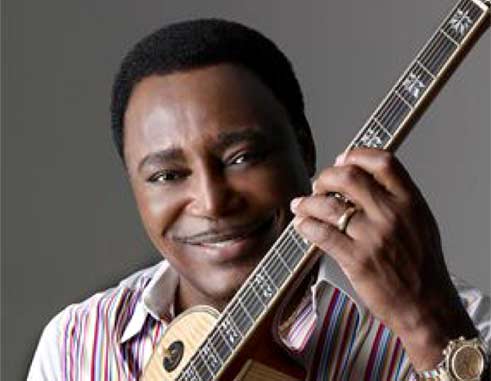 COUNTDOWN TO JAZZ AND ARTS FESTIVAL.

GEORGE Benson is among artistes who will be on show during this year’s St Lucia Jazz and arts Festival from April 29.

This guitarist has won ten GRAMMYs, played around the world, and thrilled many crowds with his playing. Appreciated as both a musician and performer by millions, George Benson has always had the dual role of expert improviser and vibrant entertainer who’s earned himself an impeccable reputation as one of music’s most enterprising and engaging stars.

Few might have predicted that striking level of stardom some forty years ago, when Benson was a fledgling guitarist working the corner pubs of his native Pittsburgh. That’s where his yen to please a crowd was born. It was Wes Montgomery, one of jazz’s most creative players, who came across Benson early on; the vet complimented the young guitarist, urging him to continue his already impressive work. In the early 1960s, Benson apprenticed with organist Brother Jack McDuff; he found the organist’s gritty swing a fertile ground for the sly, confident, and adventurous guitar lines, which earned him an early rep as a master.

By the time legendary talent scout John Hammond signed Benson to Columbia, the guitarist’s name was bubbling throughout the industry. His work for the label proved Hammond’s hunch to be on-target: brains and flash were in perfect synch. Playing the combination won Benson access to all sorts of arenas. His work was boundless: in the late ’60s he sat in on heady Miles Davis sessions, and also put a personal spin on the tunes from the Beatles’ “Abbey Road”. Hooking up with the CTI label in 1970, he was united with many of jazz’s finest instrumentalists, including Stanley Turrentine, Ron Carter, and Freddie Hubbard. His visibility and prestige grew even further. Classic albums, such as Beyond the Blue Horizon, abounded. But after a while different ideas began to flow from Benson’s muse.

The first time I tried to sing along with my guitar, everybody in the studio booed. They all said that it wouldn’t work. When I got with Tommy LiPuma all that changed. He said, ‘Sure, let’s go with some vocals, see where we get.’ What happened was Breezin’, the first jazz record to attain platinum sales. The 1976 blockbuster, his first in a long association with Warner Bros. Records, brought the instrumental title track to jazz radio. And Benson’s soulful update of Leon Russell’s “This Masquerade,” which featured the guitarist scatting along with his solo break, was a pop smash. He followed up with many pop hits, including a sultry version of “On Broadway” and the irresistible “Give Me The Night,” which thrilled many a dancer. Benson was a superstar.

Throughout the 1980s, Warner Bros. and LiPuma followed their smash success with several terrific Benson records. Individually, they blended grooves and guitar work, proving that R&B was a natural part of Benson’s profile. Collectively, they cemented his global renown.

These days Benson’s interests are many. He’s often spotted out at Manhattan jazz clubs, checking the action of fledgling guitarists. The most impressive of the lot are sometimes invited back to Benson HQ for jam sessions and stylistic powwows. The guitarist is resolute about keeping the sparkle in his playing.