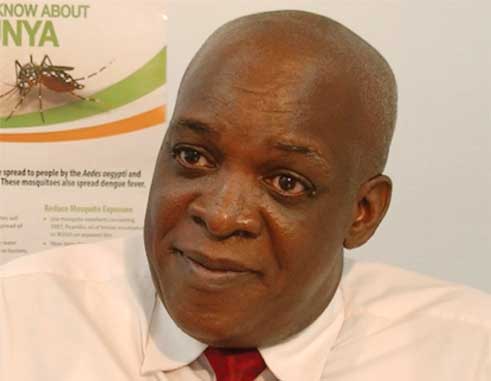 NATIONAL Epidemiologist in the Ministry of Health, Wellness, Human Services and Gender Relations, Nahum JnBaptiste ,this week reported that there were no confirmed cases of the Zika Virus or H1N1 virus in Saint Lucia to date. He said the Epidemiology Unit has implemented an effective and reliable Syndromic Surveillance System to monitor patterns in undifferentiated fevers and other such symptoms.

Said Jn Baptiste: “What we do is select the most important symptoms for certain diseases that we know outbreak during the year, during particular times of the year. Example for the influenza it’s around this time, the winter season over in the States and for the Chikunguna or Dengue it would be around the hurricane season in our case. So we track those symptoms every week and when we see an increase in the expected number of cases, we know that there is increased activity and the possibility of an outbreak.”

He added that once an outbreak is detected the ministry moves very quickly to prevent further spread of these viruses. The greatest challenge for the ministry as with the rest of the Caribbean, Jn Baptiste pointed out, is with confirming which disease is in circulation as symptoms of Dengue, Chikungunya, Zika and even H1N1 are very similar. All suspected samples he says go to the Caribbean Public Health Agency (CARPHA) for confirmation of the particular agent.

“But we cannot wait until it is confirmed before we start to implement measures to prevent it from spreading to the rest of the general population with a lot more persons becoming ill.” Jn Baptiste stated.

In 2009 H1N1 or Swine Flu became a pandemic with world wide spread of this strain of influenza. The national epidemiologist said there is always the possibility of a huge outbreak once an agent meets a susceptible population just as it was with Chikungunya last year.

He said: “Travel history is very important. Persons travel to the United States all the time, persons from the States come down here and so on and it’s the same thing between us and Martinique and the Caribbean countries and so there is always the possibility of us getting outbreaks of those viruses.”

Typical symptoms of H1N1 Virus include fever, headache, cough, runny nose and muscle pain. In preventing the spread of influenza, Jn Baptiste advocates personal hygiene practices. The H1N1 virus can be spread through the air or by droplet nuclei when someone inhales it. The most effective method he advises is to cough into your elbows, wash hands regularly and exercise good personal hygiene to prevent the spread from person to person.

Jn Baptiste stressed that citizens should take all advisories of H1N1 seriously as this virus is known to be fatal particularly in vulnerable persons such as the elderly, persons with co-morbid conditions such as diabetes, hypertension and persons with reduced immunity.

“So it’s not something we would want to just spread like wild fire here. Even now as we are in the ‘flu’ season so to speak and especially if you are travelling abroad or accepting persons who have travelled abroad and have a cough, the incubation period is very short, it’s one to five days. You would see this person getting that cough and after one or two days not progressing at all, immediately contact your healthcare provider so that we can first of all ensure that we can treat the person and also most importantly prevent the spread to your household and community.” Jn. Baptiste emphasized.

In relation to Zika, Jn. Baptiste reiterated that though the virus has been confirmed in neighbouring Martinique there are no confirmed cases of Zika virus on island. He stressed however the possibility does exist because of the close travel ties between Martinique and Saint Lucia.

“ It may seem mundane, it’s the same message, reduce the breeding grounds for the Aedesaegypti Mosquito. That’s the mosquito which causes the spread of the Zika virus. We want to caution pregnant women especially those in the first three to six months of pregnancy to avoid being bitten by the Aedesaegypti mosquito…there is a possibility of children being born with small heads – what we call microcephaly – because of the Zika virus and that’s why we would like to caution pregnant women to avoid being bitten.”

The national epidemiologist advocates sleeping under bed nets, use of repellents, wearing long pants and long sleeved clothing and whatever other precautions one can take to prevent being bitten by the mosquito.