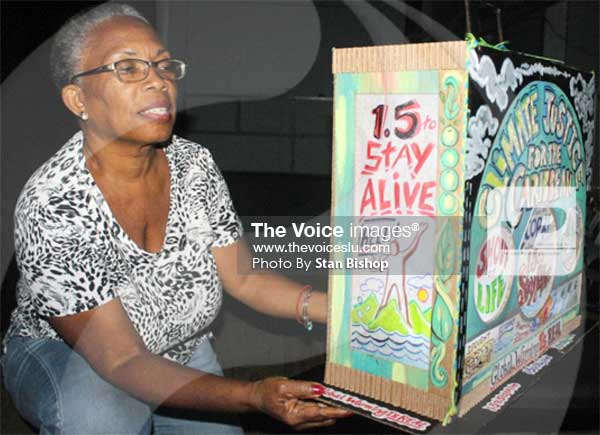 Sponsored
Share this post:
FOR nearly three decades, Alexandra Grant and her daughter, Joy, have teamed up to become the leading ladies of light at the annual Festival of Lights where their lanterns have been featured. The duo has had many successes with their creations but Alex – as she’s affectionately known by many – says they’re about to dim their light on the competitive side of the festival.

Alex and Joy began participating in the competition, which is usually held around National Day, in the mid-1980s. Alex has won numerous times and Joy has been winning in the junior category from 1987 to 1997, also winning best overall titles along the way.

Initially, Alex entered one lantern but later two, entering one in the national category as well. Her themes are usually nostalgic and incorporate aspects of Saint Lucian culture such as “Toes”, La Rose and so on. Whatever the shape of her lanterns, there’s always some vital message about our island’s culture shining through.

They stopped competing for several years but got back into the game of spreading light in 2011, entering their lanterns in two categories – traditional and national. Since their re-entry, Alex has been building while Joy presents and they have won first and second prizes up to last year. Unfortunately, our beacons of light will be making this year their last.

Alex, an artist and cartoonist, said she became interested in lanterns nearly four decades ago after hearing the story about how the tradition started in Saint Lucia. The story, she told me, started in a time when people didn’t have much and there was no electricity in certain parts of the country, especially the suburbs. They had to improvise, especially at Christmastime, to bring out the festive cheer.

Alex recalled living with her grandfather in Block DS in Castries which faces the Castries Market and watching the lantern procession going by around Christmastime. The procession would continue through downtown Castries, circling then Columbus Square where the lanterns would be displayed to large crowds gathered there. The lanterns would be judged and prizes awarded. But it’s the creativity that won every time, she said.

“The creativity of the young men at the time shone through because they would take discarded cardboard and paper and so on and fashion these small houses,” Alex explained. “They would later place them on their balconies at nights. I enjoyed that aspect of Saint Lucian life and later got into making my own lanterns, doing only traditional houses.” 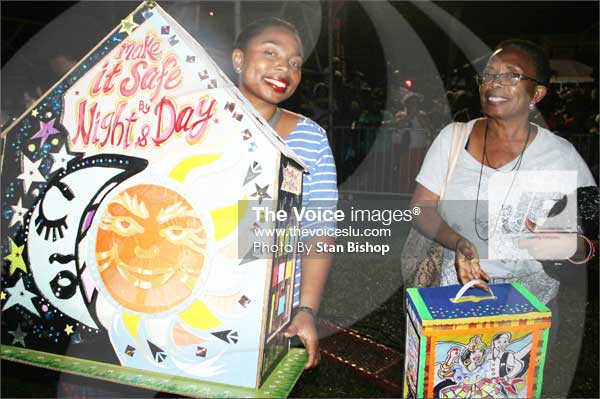 This year, Alex incorporated the clamour for climate change into her lantern, telling me that over the years she has noticed the disappearance of some local plant species. Alex said she had no intention of participating in this year’s lantern competition until she realized the importance of the COP21 talks on climate change in Paris this month. She made a lantern in the shape of a briefcase pitching the call for action to be taken.

“I’m sort of a gardener so I notice some of the changes taking place,” Alex explained. “Whenever I’m on a bus, I sit by the window and usually see the changes and the results along the journey. There used to be some wild flowers that grew near the Choc Bridge but since they dredged the nearby river, they have disappeared. Even the seasons are confused. So of course there is global warming and it could mean the death of us.”

Alex added that if one really paid closer attention to what’s taking place around Saint Lucia, one would see different changes that point to climate change. She believes Saint Lucians need to become more involved not only in their culture but pitching the messages that ensure sustainability of our environment.

“The big countries are looking out for themselves,” Alex stated. “So unless we band together and make a noise, our existence will continue to be at stake.”
The judging segment of this year’s competition took place at the National Cultural Centre (NCC) last Saturday. The lanterns were displayed at the Derek Walcott Square yesterday. The winners are anyone’s guess.

Over the years, Alex said, the requirements illustrating the requirements for each category appear to change. Today, lanterns are judged in three categories: national, traditional and original, and follow set criteria. But she fears that the competition is at risk of losing its common touch. Too often, she said, the messages get lost in the light.

With the unfortunate news that Alex and Joy are departing from this Saint Lucian pastime, one can only hope that the tradition is sustained by others. One thing’s for certain, though: as long as these multiple award-winning leading ladies of light are around, we can definitely count on them making our Christmastime a little brighter. That is if they do change their minds and continue shining their light.