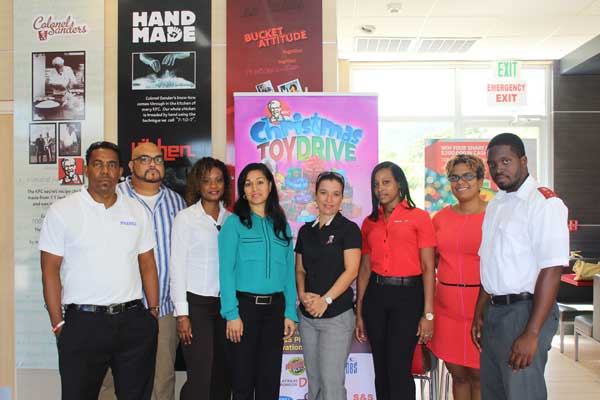 FAST Food giant, KFC is on course to give the less fortunate children of Micoud something to smile about with a massive toy drive.

The popular franchise has teamed up with the likes of Rhythm FM, DBS, S&S, M&C and Digicel to organize the toy drive and is now considering making it an annual activity.

The idea behind the initiative was to raise the spirits of the children in Micoud who lost everything during the Christmas Eve trough in 2013.

Marketing Officer at KFC St. Lucia, Deone Gardner said about a similar activity last year. “They were bouncing around from house to house for the year and they really enjoyed the entertainment and the toys. It was the one carefree day they had for that year. And seeing that joy from last year and talking to the children there was no doubt in my mind that we were going to do it bigger this year and make more kids smile”

For their part in the initiative, Digicel and S&S will serve as donation drop off points for the north of the island and they will also contribute with their own donations. M&C will also donate toys and has promised to fill the quota if the food chain fails to collect enough toys needed.

Once enough toys are collected, KFC has planned a massive children’s Christmas party for the specially invited guests only which will be held at the community’s Human Resource Development Centre December 18.

Gardner said the children have been carefully selected with the help of the Salvation Army and the Ministry of Social Transformation.