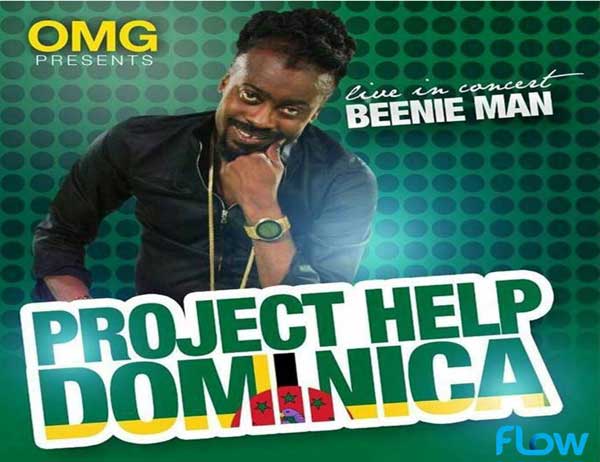 FLOW has teamed up with OMG, DBS and Kari FM in support of Project Help Dominica.

The show which comes off today at the Gaiety Park, Rodney Bay is being staged as a fund-raiser to help families who were affected by the devastation caused by Tropical Storm Erika in Dominica.

Flow is a sponsor of the concert featuring Beenie Man as the headliner along with several top local artistes, including Ezra and Iram Christ. Xtacy Band from Dominica and Razor B from Jamaica will also be performing.

Flow customers are in for treat as the show will be carried live to our neighbouring islands of Grenada and Antigua on Flow TV.

Patrons at the show are welcome to bring along non-perishable goods as part of their contribution to the relief effort. Proceeds from the concert will be presented to NEMO on behalf of the people of Dominica.

Flow Sales, Marketing & Communications Manager, ShermalynSidonie-John said. “Dominica is our sister island and part of the Flow family, so it’s only natural that we would support the Project Help Dominica fundraiser, especially knowing all that our fellow Dominicans have suffered since the passage of the storm. We encourage all St. Lucians to come out in large numbers to support the show and give generously to help our neighbors.”