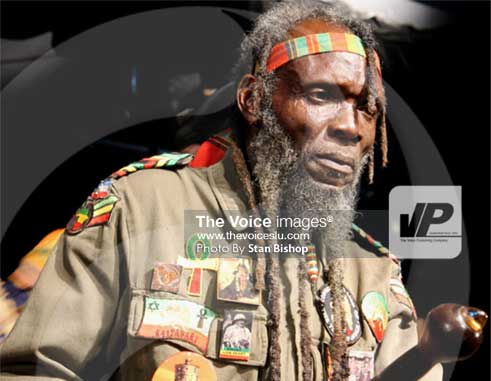 ART must definitely be an imitation of life, especially in the case of Saint Lucian musician, Ras Africa.

For three decades now, the effervescent and charismatic Rastaman has been giving us music that often makes us recoil into our consciousness. His art, he tells me, is – and has shaped — his life.

Born Constance Joseph Francois in 1962 at Hospital Road, Castries, Ras Africa said he spent his earliest years growing up at Hospital Road and Marigot. He attended the St. Aloysius R.C. Boys’ Primary School where his knack for telling stories took its roots that later led to his rock-solid brand of reggae.

“I am a great storyteller. When I was at school, I was one of the best storytellers. I used to tell the whole school stories on the microphone in the headmaster’s office. By being a storyteller from that young age, I guess it became part of me. Today I’ve become a great artist,” Ras Africa explained, his voice coarse from years of chanting spiritual phrases.

He started playing the guitar at age 11, copying whatever his father, Simon, played. His father played the guitar and congo drums. But it was from the Almighty, he said, from whom he got the courage and knowledge to write and sing songs.

After leaving Vide Bouteille Secondary School at age 15, Ras Africa said he had nothing to do despite many searches for work. That’s when he started creating music, he said. His musical influences include Bunny Wailer, Peter Tosh, Bob Marley, Culture, Burning Spear, Grammacks, Exile One, Itacion and Merrymakers.

“NouWivé” was the first song he wrote. Despite recording the song in 1990, Ras Africa said he was already singing it to large audiences here and abroad in the mid-1980s. He was also a member of a few groups, including Naked Roots, which included his two brothers. As is the case with many musicians, there’s always something special that inspires a song.

“I used to sit by the seaside and wonder what else to do,” the 53-year-old musician said. “I would often cry about not being able to get anywhere in life. I heard a voice telling me not to cry. I knew it was the Most High speaking to me. But the messages that came out in the song were very powerful.”

Ras Africa said “NouWivè” is a rallying call for an end to wickedness in the world. The time has come, he said, to keep the devil at bay. It’s all about promoting positive vibes, he said. There are other lesser-known songs about standing up against the system written and recorded by Ras Africa, but “NouWivé” is one of his two best-known tracks.

Another of his songs, “A Slice of the Pie”, is a favourite during the festive season. Ras Africa said that unlike “NouWivé”, he wrote “A Slice of the Pie” in English instead of creole because many people had pigeonholed him as being able to communicate the message of song effectively only in creole. The criticism seemed to have worked in his favour.

The popular Christmas song, released in 1995, was inspired by the scene in which he saw a bird in flight with bread in its mouth. At the time, he said, he hadn’t had a meal for the day. Inspired by the bird’s determination to survive despite the odds, he began writing down words that seemed food for thought.

Ras Africa has written and recorded 36 songs that grace three albums, namely “Irie Vision”, “Armageddon” and “Dance Forever”. He has also done four music videos. But the veteran musician, known for either his calm or high-flying stage performances that often seem never-ending, said he still has more great music left in him. In fact, since being crowned at this year’s “AnnouManjé, DanséekChanté en Kwéyòl song competition, he believes his best music is yet to be written.

“I have other stories that have never been told,” Ras Africa said. “My songs are great stories.”