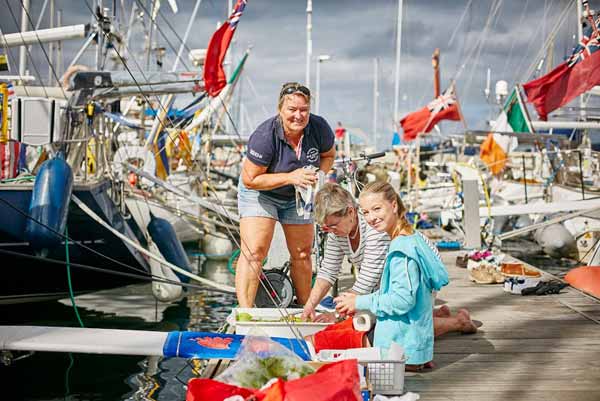 YEARS and months of intense planning and preparation finally paid off Sunday as the yachts taking part in ARC 2015 made their way out of MuelleDeportivo in Las Palmas de Gran Canaria. There was an air of excitement throughout the marina as the ocean adventure truly began for 1125 sailors and even a few rain squalls throughout the morning could not dampen the spirits of the eager crews.

Friends and families of the sailors as well as local well wishers and staff from the businesses around the marina lined the dock, cheering and dancing to the loud music blaring out in celebration of the start. Traditional folk band La parranda Café-Tin and brass band Banda Canarias marched around the marina serenading every pontoon to add to the festival feel. It was an incredible farewell atmosphere as the harbour gradually emptied leaving bare pontoons for another year.

The Tourist Board of Gran Canaria, the Port Authority of Las Palmas and the city government of Las Palmas, have been wonderful hosts to ARC participants for the past two weeks and it is their continued support that makes the atmosphere in the lead up to start day so spectacular.

Boats had to identify themselves as they left the marina and headed through a ‘gate’ before making their way to the start line. To the delight of the spectators, several crews dressed up for their departure, danced on the foredeck as the gathered their fenders and lines and waved their nations flags to bid farewell to the Canarian hosts.

While the ARC is a cruising rally, there is a start and finish line, and the boats are split into divisions according to size, type and competition. A total of 195 yachts sailing under the flags of 27 nations crossed Sunday’s start lines. A strong north-north easterly breeze of 25-30 knots and moderate seas made for a lively welcome to being at sea again.

At 12:30 UTC the gun on the Spanish naval ship Tornado fired for the start of the multihull and open divisions. The first catamaran across the line was the only Mexican flagged boat in the fleet, a Lagoon 450 El Viajero skippered by Eduardo Torres. 20 other multihulls with reefed white sails followed them over the offshore start line. Neel 45 trimaran La Caravelle was thriving in the strong breeze and was soon leading the way to Saint Lucia’s shores.

Twenty-nine boats in this year’s Racing Division were led across the start line by Ross Applebey’s Oyster Lightwave 48 Scarlet Oyster followed by fellow British flagged charter boat Quokka 8. Both are regular ocean crossers with the ARC, sailing with crews of mixed abilities led by a professional skipper. Third across the line was One & Only, a Jeanneau Sun Fast 3600 from Poland.

Sunday’s start provided a breezy beginning to the ARC 2015 ocean adventure as the fleet headed out to sea. The forecast is looking good for at least the first part of the crossing with moderate to strong trade winds, and with the established Azores high, a route close to the great circle or a little to the south looks favourable for a quick and comfortable sail. Chris Tibbs poignantly mentioned at Saturday’s Skippers Briefing that since the rally began in 1986 “the boats are bigger, the boats are faster, and communications has changed and so has navigation. But the wind and the waves are still the same.”

The departure of the ARC fleet sailing directly to Saint Lucia means a combined total of 254 yachts are sailing the Atlantic under the ARC banner in 2015 – a record number in the 30 year history of the rally. Fiftynine boats in the ARC+ fleet departed Mindelo, Cape Verde for their second leg of their crossing last Wednesday and are enjoying great downwind sailing and fishing triumphs as reported in their logs sent to the World Cruising Club website.

The majority of boats will take 18-21 days to make the 2,700 nautical mile Atlantic crossing, arriving in Rodney Bay Marina, Saint Lucia. Whatever time they make landfall, every boat will be met at the dock by Saint Lucia Tourist Board and World Cruising Club staff bearing a welcome rum punch and cold drinks. There is a full schedule of events in Rodney Bay for all ARC crews and their friends and families, culminating in the ARC prize giving on December 19.