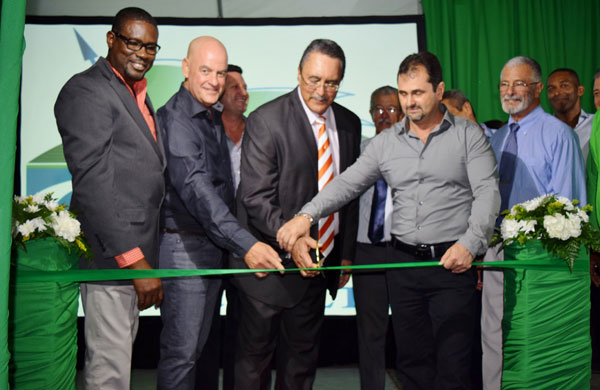 Located at Cul de Sac, the company represents a $25 million investment in new plant and equipment and employment of 40 locals.

Prime Minister Dr. Kenny Anthony, delivered the feature address stating that the opening of a new company serves to “inspire hope and confidence in the potential of our country… It is a reminder that we, all of us, should believe in Saint Lucia and in the will of Saint Lucians to adapt, succeed and prosper.”

Prime Minister Anthony praised the du Boulay family for leading this venture. He pointed out that that the timing is good, given imminent expansion in the island’s tourism plant, steady growth in stay-over arrivals, and planned redevelopment of Hewanorra International Airport in 2016. These developments, he believed, would lead to growth in the provisioning requirements for the hospitality industry.

The Prime Minister further indicated that the prospects for linkages between tourism, agriculture and the fisheries sector are reinforced by collaboration with private partner interests such as CPJ Saint Lucia. He noted that Government’s efforts to spur agriculture were beginning to bear fruit, which ventures like CPJ were poised to reap, to the mutual benefit of the company and its local partners.

“Private investment in the food sector is welcome news for farmers and consumers. To support these efforts, the government enacted an Agricultural Incentives Act. This Act has, for the first time, provided farmers with legislative protection for incentives.

“We have also provided assistance to a number of our farmers through the Farm Help programme, under NICE, the National Initiative to Create Employment. This has empowered young men and women, whilst giving farmers the labour they need to be more productive.

“I am also pleased that this investment of over EC$25 million is targeted not only at supplying on-island demand but also supporting exports to other islands in the Eastern Caribbean. Many do not understand that a country largely survives by what it earns from exports. It is simply not enough to produce solely for domestic consumption.”

Prime Minister Anthony concluded by wishing success for the new company, encouraging them to respect and take good care of their staff; cherish their relationships with clients and partner, adopt and maintain environmentally responsible practices, consider the community they operate in, and contribute to the economic growth of Saint Lucia.