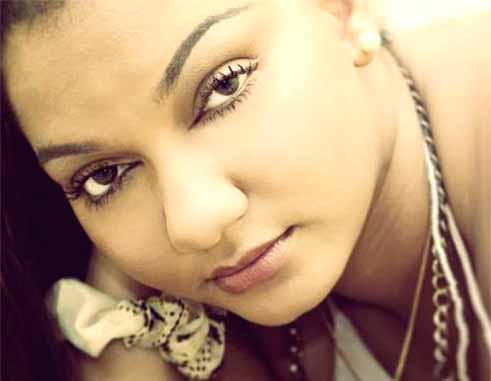 TODAY’S FITC is a real inspiration to men and especially women (like myself) who struggle daily with weight issues.

When you live in not just a society, but a world that sees fat as gross, unhealthy and unattractive (to name a few descriptions thrown around) or that fat people are lazy, greedy, self-loathing bums who are overweight on purpose, it is a breath of fresh air when an individual is able to stand up and show the world just how wrong they are.

Gaston who has lived a very exciting life from travelling and living abroad to indulging in her creative passion namely music, has ticked many of her boxes of to-dos in life including achieving one of her biggest accomplishments which was singing back up Soca music for Soca King Machel Montano for three years in a row. She also toured with Antigua’s Burning Flames for one year before the band broke up.

But with all that said and done, her full and happy life has been tested on numerous occasions as she has had to battle through incessant discrimination simply because of her waist size.

It is a fight that many have had to endure for years gone by and it is one that is still going strong today. But here is what my FITC had to say about how she deals with it all.

The VOICE: We’re talking about your voluptuous figure today, what is it like on a daily basis being a plus sized woman in St. Lucia?

Jenna-Anne: Extremely difficult. It’s hard being plus sized in the media because media managers still believe that only slim women should be on television. Sex sells, they say, as if fat woman don’t have sex (Laughs). I can’t wear the skimpy clothes like they do. But it should be about personality. I have to wear darker colours and ask for tighter shots and frames because I’m hiding the belly. I’m trying to basically find a common ground where it’s accepted. Let’s get one thing straight I love being full and curvy and I’m proud of my size. I’m not unhealthy either.

The VOICE: Were you always in that weight bracket?

Jenna-Anne: In my teens I was slim. I always had some nice legs and “bam bam” but for the greater part of my adult life, yes, my weight went up and down. I’ve tried every diet, every get slim fix, exercise and I still struggle every day

The VOICE: What is the worse form of discrimination that you’ve faced for your figure?

Jenna-Anne: It would have to be that I always wanted to become a singer and one producer said yes, you’ve got the looks, you’ve got the voice, but you don’t have the size and so I don’t think we can work with you.

The VOICE: Wow! But even with all of that, the negativity seems to be water off a duck’s back because you don’t seem phased at all…is it all just a mask or are you truly immune to the negativity?

Jenna-Anne: I’ve become immune to negativity. I will go after whatever I want because I don’t see what they see. I see a beautiful intelligent young lady ready to take over the world, fullfigured or not. I’m the girl who looks at the glass always half full

The VOICE: What do you see when you look in the mirror every day?

Jenna-Anne: (laughs) My first reaction is to how tired I look.But then I see a single mother trying to make a positive change in her life to inspire my daughter.

The VOICE: As you’ve mentioned your daughter, what kind of message or example would you like to send to her so that in her future, thick or slim, she can feel comfortable in her skin?

Jenna-Anne: It doesn’t matter if you are thick or slim. What really matters is your heart and who you are as a person. Personality over shines everything and once you live your every day life meaningfully and with a purpose, you won’t even know what weight you are. Surround yourself with people who are like-minded and enjoy that hamburger or chicken wings…there are people out there who can’t have one. (Laughs)

The VOICE: Do you think that this is a positive message to send out to anyone? Doctors and physicians always link being overweight to being unhealthy…some might say that you are not being a good example particularly to young girls, what do you have to say about that?

Jenna-Anne: I don’t think I am. Everything must be done in moderation. That includes the foods we eat and the drinks we consume. Healthy lifestyle is about being aware of what you fuel your body with. There’s nothing wrong with a slice of pizza or a cheese burger but it must all be done in moderation. I have this argument all the time based on the doctor charts. I’m overweight but I’m also 5ft 1in. so a girl with my hips and butt will be considered over weight but am I unhealthy? Absolutely not! I think the key word here is moderation.

The VOICE: Now you are well known for wearing whatever makes you feel happy and even though you keep it classy and tasteful, you are not shy about showing skin (flawless skin might I just add), from where do you get that kind of confidence?

Jenna-Anne: I owe this one to my circle of friends, which by the way, I have sexy friends, but we always ensure that we all are looking good and encourage each other…my girls are my back bone. I’d like to add that thick girls are being frowned upon but by whom exactly? Because the amount of men out there who like this fullness, I’m not sure who has the issue anymore.

The VOICE: With that said, on the flip side of things, men in St. Lucia and the Caribbean in general really do show genuine attraction and love…in some cases preference for plus sized women. How do you deal with the inundated male attention that you undoubtedly receive?

Jenna-Anne: (bursts into laughter) That’s a funny question. I’m appreciative of the compliments.

The VOICE: That famous or to some, infamous term “Roly Poly”…what’s your take on it?

Jenna-Anne: I hated that term to be honest. Because I’m rolling everywhere…NOT!
I strut and I do it on six inch heels just like the slim thangs.

The VOICE: All jokes aside, what message would you like to send out to our thick sisters out there who are not comfortable in their skin or like you, face discrimination wherever they go?

Jenna-anne: I want them to find a happy place, talk to someone and surround yourself with positive people, treat yourself good, dress up in whatever fits you and tell yourself today it’s not about my size but who I am as a person. It’s important for a woman to treat her own self…go get a pedi or a mani, make yourself feel beautiful because everyone is.

The VOICE: Finally, to those bullies out there who take pleasure in poking fun at heavier people or those who simply find the notion of plus sized to be insulting and repulsive, let em have it…

Jenna-Anne: A few extra pounds shouldn’t intimidate them and it’s probably because most of them are fighting with their own insecurities and trying to find their place in society. But what doesn’t break us makes us stronger so we thank them for pushing us and making us better while they remain in their slum…empty barrels make the most noise.