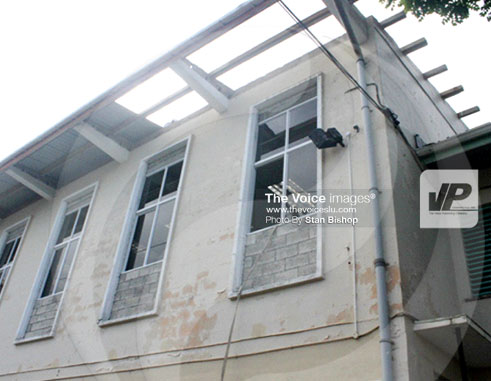 Sponsored
Share this post:
THE President of the Bar Association of Saint Lucia, Mary Juliana Charles, says the members of her association will not enter the court building on Peynier Street unless the government produces an air quality assessment report on the premises.

Charles told The VOICE yesterday that for years now lawyers and other staff members who work in the court have been reporting bouts of illness due to poor air quality in the building. She said pigeons, bats, rats and other animals have burrowed themselves into the building. Not much has been done regarding the courthouse’s upkeep, she said, since it was built following the great Castries fire in 1948.

“With very little renovations (and) attention, the court building has become defective,” Charles said yesterday. “I cannot say why the government is not making an effort to make a new Halls of Justice a priority. What I can say, though, is that they keep saying there is no money. Nevertheless, the justice system is suffering.”

Charles said Saint Lucians have not properly appreciated the importance of a justice system, resulting in a muffled outcry for better conditions in the system. That gap, she said, must and will be filled by members of the legal fraternity. The Bar President said her members have remained quiet on the matter for many years, which might have been interpreted by the relevant authorities as a weakness.

“Every passing year we become more hopeful and nothing is being done,” Charles said. “This time, it was the Ministry of Justice or Legal Affairs (itself) that ordered the closure of the court to remove the remaining asbestos from the eaves of the court building. That was in June this year.”

Charles said when the court went on recess in July, repairs were scheduled to begin. When notice was communicated to the Bar Association that the building was reopened for the new law year in mid-September, Charles said, “we found that the so-called renovations were totally lacking”.

“There were still ladders in there and remnants of workmen’s materials and so on. Yet we were given the okay to go into the court to start the new law year. The only semblance of renovations was the criminal master’s court, even though some of my members told me that one of the judges’ courts downstairs had been renovated,” Charles explained.

The Bar President said that while some members of the public might be tempted to deem her speaking out on the matter as having ulterior motives, her association remains concerned about the safety of its members and the public. All the Bar Association had requested from the government was a report on the air quality at the courthouse since the removal of asbestos from the building. To date, her association has not received the said report, she said.

Since going public on the matter last Friday, Charles said she has noticed that efforts are being made to ramp up renovations at the courthouse. She expressed gratitude to the government “for at least showing some care” on the matter.

So just when will the downtown Castries courthouse be fit to hear cases?

Charles said she has not been furnished with any information in that regard. Nevertheless, she said she and her association members are monitoring the situation, hoping that it gets the appropriate attention from the authorities. The closure of the courthouse, she said, “is an indictment against the people of Saint Lucia”.

Charles said that as of now all cases due to be heard in the court have been put on hold due to the court’s staff also refusing to enter the building in its current state. She added that while she would not ascribe blame to any particular political party that would have neglected the court’s maintenance over the years, “government must be sensitive enough to know that every civilized society needs a proper justice system”.

Sponsored | Article continues below
“A government must have pride in showcasing its justice system,” Charles stated.

Charles said that while the Bar Association’s initial concern about the building stemmed from the air quality assessment report – and not necessarily the renovations – she believes that all public buildings need to meet acceptable standards.

Over the years, the legal fraternity has staged protest action outside the beleaguered courthouse over safety concerns. Even staff of the High Court Registry, also located in the building, stayed away from the job sporadically due to inadequate working conditions at that location. Charles said enough is enough.