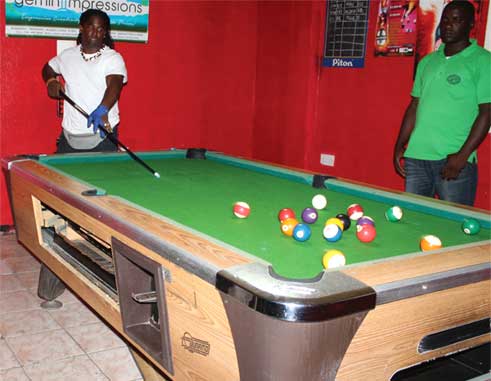 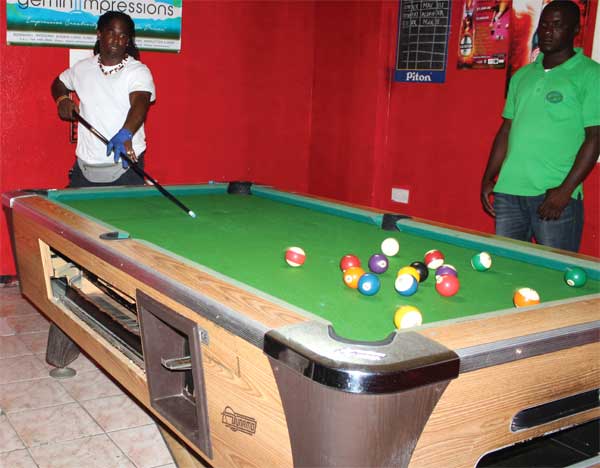 MATCHES continue this weekend in the second annual Cue Sports St.LuciaInc / Mackeson Pool Tournament sponsored by Bryden and Partners. A total of 12 teams are participating and are in two groups of eight.

Today from 7.00 p.m. at Biche, Cabiche – Ultimate Players will take on Rainbow Lasers and Crown Shooters go up against Sharp Shooters, while tomorrow – at Harrow’s, Vieux Fort from 6.00 p.m. Charlie’s Bar will be up against AnseGer Pool Team and Soufriere Sniperz meets Fireballs.

Meanwhile, it was only standing room available this past Saturday at the New Rainbow 2000 in Grand Riviere, Gros Islet as the showpiece continued. In the first match of the evening in the best of three Group B – Sharp Shooters defeated Fire Ballz 4 – 0.

The action continued on Sunday at the Laughing Fish, Dennery. In Match No.1 – Group A – Magic Sticks walked over Cue Ball Warriors 4 – 0 ( forfeit), while in Match No. 2 – Group B – Mon Repos All Stars handed Fire Ballz their second defeat in two days winning 4 – 2.

Speaking to The VOICE Secretary for Cue Sports St.LuciaInc Eva Williams said, that his company was formed to promote the sport of Pool in Saint Lucia, organize tournaments, and get more people involved in competitions and to bring the sport to a higher standard so Saint Lucia can go international”.

Williams added: “We have a record 12 teams from around the country participating in the tournament and we are pleased with the response thus far. The players in the two groups will play each other with the four top teams heading into semi final /finals slated for Saturday September 12 at the Castries Comprehensive Secondary School Auditorium.