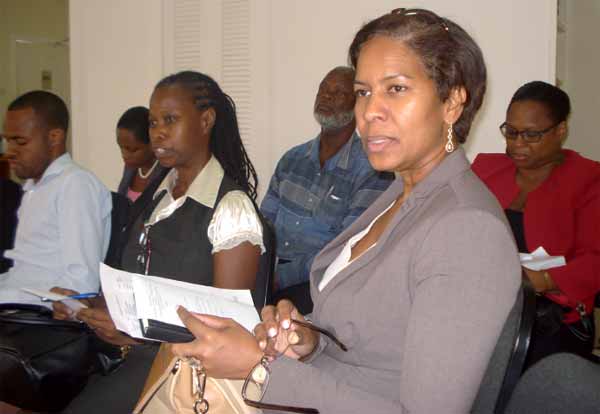 STRONG leadership, at both the corporate and political level, has been cited as a vital prerequisite to economic growth and prosperity.

This was one of the key talking points at a dialogue between the business community and the National Vision Commission held this past Tuesday.

The view was expressed that for any vision to be successful, it requires strong and uncompromising leadership at the level of the political directorate, as well as in the corporate sphere. It was felt that Saint Lucia, which was once considered the most advanced country in the OECS, is now lagging behind.

The business community acknowledges the need for a visioning process and gathering the collective views of the populace as a mechanism to craft a direction for the country, but believes that even more important is the will to do what is necessary, to get us to where we want to go. Singapore was cited as a development model worthy of emulation. It was noted that while Singapore had a benevolent dictator, strong and focused leadership was the key ingredient to its success as a small developing country and economy.

While not suggesting that dictatorship was the answer to Saint Lucia’s economic woes, the view was that leadership will have the greatest impact on our economic fortunes as well as other aspects of our development. Business leaders would also like to see major reforms to the education system, to produce citizens who are not just qualified, but creative and innovative in their thinking, and their ability to adapt to the new global realities.

Concern was also expressed about the revised Treaty of Basseterre, which makes the OECS one economic and social space, and how the new Economic Union impacts sovereign member states. In creating a vision for Saint Lucia, it was felt that it must be considered how that vision fits into the new dispensation of the OECS Economic Union.

The dialogue with the business community, which was held under the theme “Partnerships for Growth and Development” , was well attended by private as well as public sector leaders. In attendance were representatives of the Chamber of Commerce, the Private Sector Council, the St. Lucia Manufacturers Association, Invest Saint Lucia, the Ministry of Commerce, the Saint Lucia Coalition of Service Industries, SLISBA, SEDU, the Insurance Council of St. Lucia, and individual entrepreneurs.

It was a frank and spirited dialogue which focused on issues such as reform of the current regulatory environment to make doing business more seamless, policy changes and incentive regimes to spur growth in productive sectors and better access to finance, especially for SMEs. Another key talking point was the seeming decline of volunteerism and the tradition of Koudmen.

One of the more poignant observations emerging from the dialogue with the business community is the realization that “our people are great…we just need to get the greatness out of them.”

The Commission has proposed a follow-up meeting with the business community, to complete their input to the visioning process.

On Wednesday, the National Vision Commission held the first of three Youth Dialogues when it met with youth in the north of the island at the Gros Islet Secondary School. The session was attended by a cross section of young persons from communities in the North as well as past and present executive members of the National Youth Council (NYC).

In her welcome remarks, NYC President Louise Victor, reminded the youth that they comprise the vast majority of the island’s population, and that they have tremendous power as a key demographic. She urged them to speak out and say what’s affecting them and what their dreams and aspirations are. Among the major issues highlighted at this first Youth Dialogue were deficiencies in the education system, unemployment, the impact of the breakdown in family life on young persons, crime, unemployment, delinquency, truancy, and the inability to afford or access higher education.

The Commission will meet with youth in the South of the island tomorrow at the SALCC Southern Extension from 10:00 a.m. The third dialogue for youth in west coast communities will be held on Wednesday in Soufriere.

The schedule of National Dialogue will run through to late November. Over the next few weeks, the Vision Commission will meet and dialogue with all key sectors and groups including trade unions, community elders, civil society groups, faith-based organizations, and productive sectors such as tourism and agriculture, along with other key sectors like education, planning and infrastructure, arts and culture, health and human resources.

The Vision Commission is mandated to mount a National Dialogue as a vital precursor to the articulation of a National Vision and National Strategy for Saint Lucia.