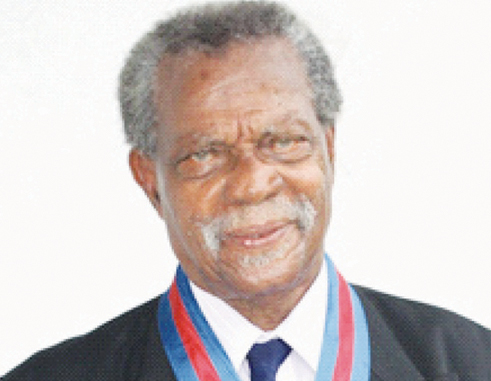 SIR Dunstan St. Omer, Saint Lucia’s most-acclaimed painter, who also designed the Saint Lucia flag, is expected to become the focus of an annual festival aimed at ensuring his legacy lives on.

A team spearheaded by Nobel Prize-winner, Derek Walcott, is now in discussion with other interested parties to host a requiem mass to be followed by a grand bazaar at the Church of the Holy Family at Jacmel.

Monsignor Patrick “Paba” Anthony is also teaming up with Walcott and the St. Omer family to bring the project to fruition. Anthony had a longstanding friendship with the late Sir Dunstan, who was declared a National Cultural Hero by the Folk Research Centre (FRC) at a ceremony held in October 2007 at the Church of the Holy Family.

Recently, Anthony and St. Omer family members met at the Church of the Holy Family to gain support for staging the event to honour Sir Dunstan, who died on May 5 this year at age 87. Following a two-hour discussion with parishioners there, a joint committee agreed to undertake preparations for the event.

Artist, Alwyn St. Omer, one of the late icon’s nine children, told The VOICE that the idea for the mass and grand bazaar stems from wanting to do something tangible in memory of his late father’s contribution to the arts as well as for his birthday, October 24. The event is among other plans to honour Sir Dunstan, he said.

“We’ve already established the Dunstan St. Omer Foundation which should be launched in October, just before his birthday,” St. Omer said. “The aim of the foundation is to embellish what’s already being done through the Cultural Development Foundation, Folk Research Centre and Ministry of Creative Industries by making scholarships available in different programmes to young people.”

St. Omer said the hope is that the foundation contributes to raising the level of the arts and creating opportunities for young upcoming Saint Lucian artists. It’s something his father would have wanted, especially in the area of handicraft, for which he had a special love, St. Omer told The VOICE.

“The Dunstan St. Omer Foundation will be an umbrella organization that will do projects in all these areas to help young people,” St. Omer said.

St. Omer said Walcott’s original plan before his funeral was to do something similar for Sir Dunstan, with whom he has shared a longstanding friendship that spanned decades. However, the church at Jacmel would have been too small because Walcott wanted to invite his friends from around the world to be part of the guest list.

“Derek’s international friends will be coming here to celebrate. But the event will also be an opportunity for them to meet with the local artistic community to create links. This is a kind of fulfilling Derek and Daddy’s dreams of helping the arts.”

In his 1976 poetry collection, “Another Life”, Walcott immortalized Sir Dunstan’s contribution to the Jacmel church where the late icon painted the captivating mural in 1973 within three weeks for which he received $300. In the mural, Sir Dunstan painted various aspects of Saint Lucian life, using real people from the community. The first stanza of Walcott’s poem reads:

“The chapel, as a pivot of this valley,
round which whatever is rooted loosely turns
men, women, ditches, the revolving fields
of bananas, the secondary roads,
draws all to it, to the altar
and the massive altar-piece;
like a dull mirror, life
repeated here,
the common life outside
and the other life it holds
a good man made it…”

In the first year, the event will take the format of a requiem mass during which special artistes will perform to be followed by a grand bazaar will that will afford the community to capitalize on the JounenKwéyòl weekend. An art exhibition is also being planned at a venue and date to be announced.

Alwyn St. Omer also made a pitch for corporate Saint Lucia to support the October 24 event. He called on residents of Jacmel and other surrounding communities to lend their support to paying tribute to Sir Dunstan. He is also encouraging Saint Lucian artistes to embrace the event by indicating their interest in participating.