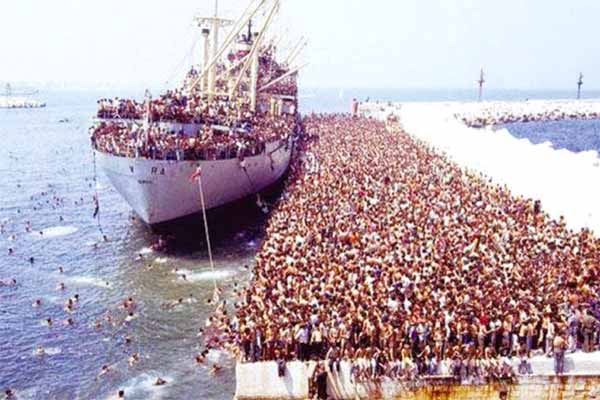 THE escalating refugee crisis is hitting Europe hard. The worst of its kind since World War II, it sees thousands of daily arrivals in the face of unavailability of welcoming facilities and refusals to accept or accommodate. Countries are backing down from earlier promises to share quotas. Common borders are closing and open crossings are replaced by walls and barbed wire. The numbers of arrivals this year has already doubled that of 2014 — and the United Nations predicts that millions will eventually make that desperate and dangerous Mediterranean trip in search of better lives in greener pastures in promised lands of milk and honey.

With hundreds of thousands fleeing new and harsh realities created by external intervention, the EU has been unable to respond in unity. Brussels bureaucrats talk about respecting refugee rights and sharing allocations, but many capitals have passed new laws that outlaw them – and are threatening deportations. Several member-states absolutely reject the EU’s near demand for automatic, unchecked entry by one and all who land on Europe’s shores. Some fear the proposed ‘Open Door’ policy will only encourage human traffickers and people smugglers to continue what has already mushroomed into a daily nightmare. Bountiful illicit business thrives off Europe’s indecision and reluctance. The numbers landing continue to multiply by the day as the divisions widen by night.

Syria and Libya continue to be the major sources of refugees heading to Europe. But after being virtually invited to flee to waiting open arms more are also arriving from other parts of the world. In addition, cuts of Western aid to nations that already house millions add to their reasons for fleeing. And worsening humanitarian crises in conflict zones will add to the flights from terror.

The UN estimates there are over 19 million refugees worldwide. But one common denominator in most cases is that they’re fleeing lands being bombed by Western aircraft backing regional allies.

At the end of their desperate journeys to Europe, most now there face new realities. Instead of the lily white fields promised, they end up in camps and isolated fields, forced to occupy roadsides and barren lands while border guards hunt and haunt them between borders and volunteers throw scarce food into large hungry crowds. They fled wars to face battles of survival in lands afar. They were promised open-arm welcomes, but are now being isolated, detained or arrested.

The crisis continues to divide the EU. Some member-states reject being dictated to by unelected officials in Brussels who ignore their national misgivings, or their insistence on exercising sovereign decisions. As such, the EU can’t agree on refugee quotas – not even on how to share those already there. States are shutting down border crossings while accusing neighbours of “people dumping”.

The future doesn’t look good for Europe — or the refugees. The growing anti-immigrant sentiment does not bode well for the hundreds of thousands now stranded at and within various borders. Many who’ve already been settled are being isolated — in some cases being openly told by municipal authorities they’re “not welcome”. Anti-immigrant parties are joining ranks across borders to oppose the arrival of what some describe as “hordes of immigrants” who “will multiply quickly” and “continue to upset the traditional ethnic European balance.” The far right is accusing the EU of “opening the doors and windows of Europe” to immigrants who will only “breed the next generation of terrorists”.

Europe is in a quandary over the refugee crisis. But the stark reality is that the EU is reaping some of what NATO has sowed elsewhere. Bad eggs have hatched and the proverbial chickens are flying home to roost.

Years ago, when the warlords in the West planned and executed their Desert Storm and Arab Spring operations so far away from home, they never bargained for what’s now on their doorsteps. Regime Change was pursued across the Arab world, with troops and armaments deployed overtly and covertly. Mass protests were supported from outside. The world was changing before the very eyes of those directly affected.

But now, armed groups the West backed abroad have turned back to haunt their backers on various battlefields. And the people they claimed to have freed from dictatorship, tyranny and misery are now being floated into ‘Fortress Europe’ in numbers too large to handle.

There’s an inescapable connection between the EU’s actions and the resulting reactions. The refugee crisis originated mainly from the acceleration of Western military intervention in other countries in pursuit of national and collective geopolitical and geo-economic objectives abroad. The more wars they create to sustain the global military industrial complex, the more refugees they will also create.

All in all, the future doesn’t look good for the EU’s handling of this crisis. It continues to fail to agree on a united policy for a way forward.

Top EU officials publicly admit the flow can be slowed — even stopped — by creating conditions that will make refugees not want to flee their battered homelands. But even that is light years away, given the magnitude of the task of rebuilding what NATO has destroyed elsewhere. Further, Western states are backing down from pledges and international aid flows to existing overcrowded refugee camps in the Middle East have been reduced to trickles.

Europeans are largely sympathetic to the plight of the refugees, but some governments are demonstrably more interested in arms the lucrative sales that fuel the conflicts that generate refugees. Some states remain frozen in their positions while the refugees are left out in the cold. And the Shenghen Treaty’s free flow of movement between European borders has been halted.

The EU policymakers are frantically searching for elusive solutions, while the political directorate quarrels across borders, between fences and from behind long walls and locked gates. Much is being suggested, with little being done that actually works. East and West simply can’t agree on the next step(s). And all that’s been done (so far) is still not enough.

Really, the EU today is a union divided. The result: Europe today is a house divided