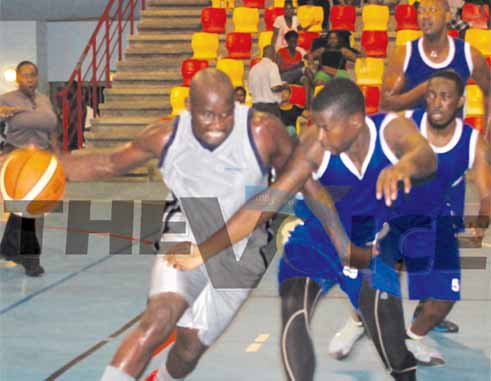 A huge crowd of supporters from the various business houses will converge on the Beausejour Indoor Practice Facility tomorrow evening as the showpiece continues in the Commercial Basketball League with another exciting double header.

In game 1, Group B, from 6:00 p.m. Inland Revenue Department plays Lewis Industries, while in game 2 Group B, St. Lucia Teachers Union, will be up against Le Sport from 8:00 p.m.

In a Group C match up last evening, Media with a win and a loss to their name took on BOSL / ECFH with two wins.

Meanwhile, the action is definitely heating up and as is customary, eight teams were in action at the weekend with victories for Le Sport, BOSL/ ECFH, AnseChastanet and Fire Service.

On Friday evening, Insurance All Stars came up against the undefeated and red hot Les Sport. Despite being fairly competitive in the first half, Le Sport, amidst raucous support from the fans pulled away convincingly in the second half, and closed off the game 78 – 36.
KFC Player of the Game was Joel Polius from Le Sport with his unrelenting aerial assault characterized by thunderous dunks who finished with 19 points and 15 rebounds. For Insurance, the usual suspect was Jean Louis Edward with 24 points and 7 rebounds.

In game 2, BOSL went up against the much improved Ministry of Public Service. At this stage both teams came out aggressively, appreciating that every game and point counts. At the half, BOSL half a slim lead 30 – 26.

The second half was just as competitive with lots of physical play, trash talking and the popular “stirring the Pot” gesture made famous by NBA star James Harden. But in the end, there could only be one winner, and that was BOSL who took advantage of Public Services poor shot selection and even poorer transition defence-securing the win 69 – 55.

KFC Player of the Game was BOSL’s ShamoirJn Baptiste who showed why he is a two time scoring champion in the CBL- registering a monster 43 points, 6 rebounds and 5 steals. For the Public Service, Mikel Emmanuel scored 16 points 9 rebounds, 5 assists.

On Saturday, game 1 was a low scoring but entertaining affair-however new comers AnseChastanet Ballers pulled off the nail bitter and defeated Windjammer 39 – 38.

KFC Player of the Game was AnseChastenet’sLinzel Alcee who recorded a strong all round game with 26 points, 12 rebounds and 6 steals. For Windjammer Lawrence Pierre scored 10 points and 9 rebounds in the loss.

In game 2, St. Lucia Fire Service staved off a strong challenge from the Teachers Union and won by a slim margin 55 – 51.

For the Fire Service dominant big man Marcian Calderon was the KFC Player of the Game with 17 points and 12 rebounds. For the teachers Roger Leon was the standout recording 15 points and 5 rebounds in the loss.