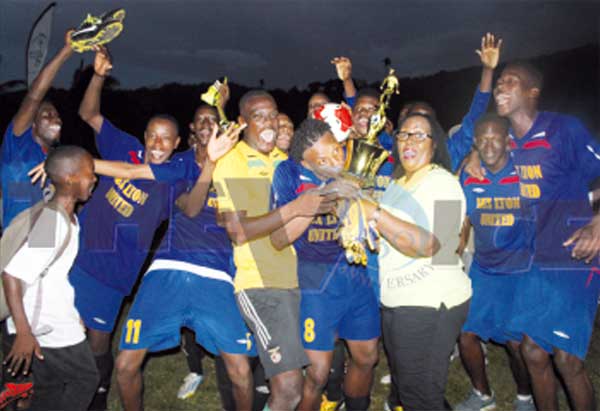 OVER 1500 football fans converged on the Grand Riviere Playing Field on Sunday to take in the showpiece as the Mabouya Valley Football League drew the curtains on the 2015 EC Global / Mabouya Valley Under – 21 Football Tournament.

Immediately after this encounter all eyes and attention were on the finals, the highly anticipated clash for the title, between the tournament’s two unbeaten teams Aux – Lyons United Sports Club and Togetherness Youth Sports Club.

Both teams made a bright start to the game creating good goal scoring opportunities, however it was Aux Lyons United who took the lead in the 20th minute thanks to a brilliant header from central defender No. 2 Travis Avril to take the lead by half time.

The high quality of play from the teams continued and within 10 minutes after the break midfielder No. 11 Mentus Donavan scored a breathtaking header to put his team in two goals up to seal the victory and championship.

Despite the constant pressure from Togetherness Youth thereafter, Aux Lyons United was able to hold on to their advantage.

This was the fifth edition of tournament and at the closing ceremony Mabouya Valley Football League chairmanKendel Emmanuel expressed his appreciation to the sponsors for their investment in the youth of the valley.