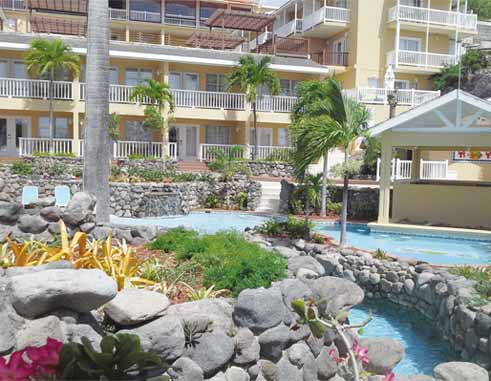 BASSEERRE, ST. KITTS: There is a new look hotel in downtown Basseterre that ‎is the talk of the town. And while it was built in 1969, no one seeing it then would believe that in 2015 it’s the same property.

The Ocean Terrace Inn known affectionately as OTI to most Caribbean people who have visited the St.Kitts capital‎, has been transformed into a splendid resort, which now carries a four star rating.

The boutique ‎hotel which enjoys a prime location just outside the capital city with a breathtaking view of the Caribbean Sea, was recently the temporary home of a group of Caribbean journalists who discovered that they could not get enough of the property in a four day visit.

“In a sense, it was quite like I never left home. Somehow I felt like I had at some point previously met the folks, I mean the staff, who took care of us.”

“It was an amazing experience, and I will be back there in a heartbeat (not sure if she actually meant a heart-break) for a vacation. The staff of the OTI are simply precious,” said Andrea ‎Perez, a journalist who hails from Trinidad and Tobago.

She talked about planning to wed in the months ahead and she had not seen or sampled a better get-a-way location.

But I could understand perfectly what she was saying as the OTI offers that kind of cozy, affable and affordable “luxury”. ‎It somehow seemed in the middle of everything yet allows a measure of privacy, that makes its location special.

This experience was borne-out by the fact over that week end I ran into a close friend at the new Verandah Restaurant the day after I arrived, and we agreed to hang-out on one of my three remaining nights at the property, and although he was three doors down my corridor I never got to see him for the remaining days. That can easily happen at the OTI as it affords quick entries and exists, whether you use the front or back of the resort.

The renovated property now supports 50 air-conditioned guest rooms and suites, a swimming pool ‎created like a meandering river, free WI FI throughout the property, two signature restaurants, 2500 square feet of meeting and event space and fitness facilities among a host of other amenities.

The OTI is operated by Management Service ‎Consultant, Barbados born Richard Williams. Following the renovations he replaced St. Lucian Michael James who served as General Manager for several years. James has since returned to St. Lucia where he serves as General Manager of Sandals Regency Golf Resort and Spa.

In explaining the need for a make-over Williams simply said that like people, properties get tired, and OTI needed to reinvent itself.

“For the investment we made in the property we got particularly good value. We have put in new infrastructure at every level, we have redone and redecorated every bedroom, in addition to all public areas, so that the property is like a new hotel, certainly it feels that way,” Williams said during one of the many moments he hung out with the visiting travel writers.

Not surprisingly, the OTI is largely supported by Kittitians themselves, with the corporate community contributing 65% and the rest leisure. However Williams said that the OTI was seeking to appeal to the wider Caribbean which it considers its key market.

“So we search for creative ways of talking to our audiences in the rest of the region, St. Lucia and Barbados not being least among that number and as hard as it has become, working with LIAT to deliver new and improved services to the OTI.”

Williams said that tourism development in St.Kitts was now catching up with the rest of the Caribbean having lagged behind. But at the same time he said, measures are being put in place to ensure that the island along with Nevis avoid some of the “over building and over development” that has been rampant in some neighbouring islands.

“We hope the destination will see itself unapologetically as being very authentic, offering a unique type of tourism which we believe will allow us to attract a higher end visitor, who will leave more foreign exchange behind and allow more jobs to be generated in the community.”

“We at the OTI are certainly trying to attract that clientele and doing everything we can to support the tourism community and authorities to be successful in that regard,” Williams added.

But if there is one aspect of the tourism sector in the twin island state that officials generally appear unhappy with, is the service provided by LIAT. Several hoteliers especially owners of medium size to small properties lament the fact that regional travel which was once their biggest market had declined significantly.

“LIAT has sadly done St.Kitts a disservice, the hub and spoke relationship over Antigua has not worked for us at all. I am not an airline person, but as an end user and a recipient or non recipient of their air seats, we want a far better service,” Williams said.

The pertinent issue he contended is the inability of LIAT to comfortably help passengers through the Antigua hub.

“I believe that has been a problem that most people I talk to in the Eastern Caribbean, Barbados, Grenada, Saint Lucia and Trinidad would reflect on.

“I would be in favour of more traffic coming non-stop to this part of the Caribbean from Barbados and Saint Lucia, that’s the core of our business.”

However Williams conceded that in fairness to LIAT the air fares which is another deterrent to travel is still driven by government taxes and levies, that has become the largest incremental factor.

“If governments in the region could agree to back-off from that pricing policy, then it would go a long way towards reducing airfares and freeing up travel across the region,” he added.