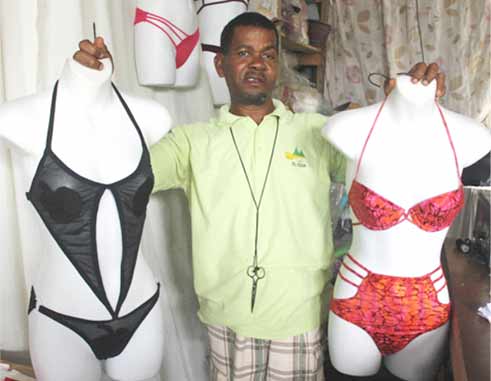 Sponsored
Share this post:
SOME business ideas just rub off on you and like they say, one of the key factors involved in setting up shop is location. As luck would have it, Victor Lascaris just happened to be in the right place at the right time and today his sewing skills are sowing bright prospects for his small business.

Along with his wife, Rose, Lascaris runs Rafferty Intimates, an apparel business they started in 2003. The company was based in Dennery where Lascaris is from originally but Lascaris and his wife moved shop based on some business advice they got recently.

“Nine months ago, we hired a business consultant to draw up a business plan for us,” Lascaris said. “In his report, he suggested that we leave Dennery and move to Castries. So for the past six months, we’ve been based at Bocage.”

Lascaris’ early beginnings in business took root when he worked at the now-defunct Belle Fashions garment factory in Dennery as a maintenance supervisor from the 1980s until that establishment closed in the 1990s. His tasks included identifying the problems associated with the sewing machines they used there. After a while, he found himself learning to sew by accident.

He took up sewing full-time over a decade ago and now Rafferty Intimates specializes in intimate and swimsuit apparel such as bras, panties, lingerie and swimsuits. The company makes apparel of any fit and also takes custom-made orders. As he tells it, business was very attractive back then.

“When we first started this business, the market was pretty much closed, so our sales were huge. However, with much more Chinese clothing coming into the island, it has become very difficult for us. Thank God we decided to include swimsuits as of late,” Lascaris explained.

Lascaris said one of his main goals for the business was to create employment for people in Dennery where the business was previously based. He started out there with two employees but when the market got difficult, he was forced to let them go and do all the work on his own.

Nevertheless, Lascaris still dreams of creating employment within his business to help curb the high unemployment problem. His wife, Rose, runs the administrative part of the business while he spends at least six days a week sewing eye-catching clothing items together in his small shop.

“There are so many small businesses around. If one small business employs at least one person, it would make a world of difference. It would mean that more households would have bread and butter on their tables. But then there’s a certain level of support we get from the government and then it cuts off,” Lascaris lamented.

To Lascaris’ credit, Rafferty Intimates swimsuits have found their way onto the National Carnival Queen Pageant stage for the past three years. He has created pieces for local carnival bands such as Red Unlimited, Just 4 Fun and Looshan Revellers. His works have also appeared at the Jaycees Queen Show, Carival and Miss Anguilla Pageant. He recalled the feedback he got from this year’s National Carnival Queen Pageant.

“The feedback was so awesome. I just couldn’t imagine things would turn out this way. The Facebook page was flooded with so many ‘likes’ and positive comments. It was great to see this happening. I felt that all my work was going somewhere,” Lascaris explained.

Among Lascaris’ long-term goals is business expansion, anything that will get him away from the cramped space he operates from under a shed outside his home. Increasing his regional market base – and possibly the international market – is also a work in progress.

Rafferty Intimates has won much praise from its customers and St. Lucia Industrial and Small Business Association (SLISBA) also awarded the company the award for Outstanding Enterprise in the Creative Industries two years ago.

Currently serving in his second term as SLISBA’s Vice-President, Lascaris has been able to benefit from the workshops hosted by that organization. These workshops serve to give small entrepreneurs the technical tools needed to strengthen the businesses. Nevertheless, he believes SLISBA can do more to assist small businesses in marketing and accessing markets for their products and services.

Lascaris said sourcing raw materials such as fabrics and threads locally and regionally is like walking barefoot on pins and needles. In most cases, he finds himself ordering materials from as far as Taiwan and China. Getting them through Customs just adds to the problem as fees charged are not cheap. These are some of the things he wants his customers to appreciate whenever they get the privilege of wearing a Rafferty Intimates outfit.

“The quality of my products compares easily to that of Victoria’s Secret,” the businessman said. “In fact, while working at Belle Fashions, I got the opportunity to learn what top quality was all about since that company actually produced garments for Victoria’s Secret. So I’m very knowledgeable about top quality standards and I keep going at it.”

His advice to fellow small-scale entrepreneurs: “As small business owners, many of us find it difficult getting by on a day-to-day basis. But I would advise them to hold strong to what they love doing. You must survive.”