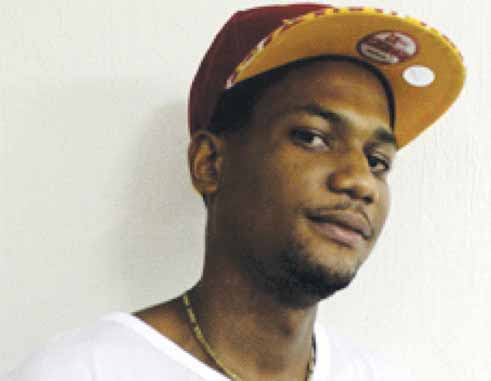 DESPITE its shortcomings, this Carnival season did produce many winning moments, especially where showcasing future stars is concerned.

In previous issues of Canelles, we featured the strides being made and challenges being faced by young soca aspirants CJ and Shemmy J.

This week, we feature yet another such talent, Brian Straughn, who goes by the stage name Pappy. Like CJ and Shemmy J, Pappy is already staking his claim as being among the next crop of captivating and talented soca stars to take Saint Lucian soca music beyond our shores.

A former Vide Bouteille Secondary School student, 22-year-old Pappy lives at Cedars Road, Castries, and is dreaming of dominating the local soca music scene. For someone who didn’t really like music initially, Pappy got a learning experience while working at Sandals La Toc after leaving school in 2010. As a waiter at Sandals La Toc, he was used to music flowing through his ears shift after shift. After some time, he just couldn’t hold back his germinating musical inclinations.

“I got introduced to doing music through a very good friend, Mark Joseph, also known as Seebo,” Pappy tells me. “I’ve always had a passion for music but didn’t have the courage to do it. I always felt that if I got a little push to do it, then I would. Seebo really helped me get to that point.”

Pappy started as a backup singer about three years ago which gave him the urge to push his musical ambitions forward. He entered the Piton SocaStarz competition in 2013 after seeing Seebo doing well in that competition. Unfortunately, he did not even qualify for the semifinal round. Last year, he returned to the competition, this time with an original piece, “Move”, written by Seebo. The song got him as far as the semifinal stage.

Things turned around for Pappy this year after another friend/rap artiste, Joel, co-wrote with him the song, “Drip Sweat”. The song got him as far as the final in this year’s Piton SocaStarz competition.

“It’s a very nice song. If people really listen to it, they’ll get the message of the song. It’s a great party soca song,” Pappy said.

The young soca aspirant is not yet affiliated with any soca tent. He says he’s still holding out on that dream since he’s more interested in conquering the Piton SocaStarz stage first. Nevertheless, he has hopes of conquering the calypso, groovy soca and party soca genres in the future. He’s also contemplating entering the Inter-Commercial Calypso Competition if given the nod by the security company with which he is employed.

“At the end of the day, when I go on that big stage, I want to have more hype and power. I want to be free. But for now, I’m just trying to elevate myself as an upcoming artiste,” Pappy said.

Pappy said he pays close attention to and is inspired by other Saint Lucian artistes doing their thing. He singled out two-time Groovy Soca monarch, Arthur Allain, as a mentor who encourages him to stay focused. Inspiration also comes from Nerdy, CJ, Mysterio, Hollywood HP, J-Budz, Desean, Alpha and fellow Piton SocaStarz artistes. To collaborate on musical tracks with them, he said, would be an honour.

There’s a great deal of seriousness that comes through Pappy’s voice whenever he speaks about his musical future, especially when he explained that after this year’s Piton SocaStarz competition ended, he and a few of the other competitors organized a social night where they discussed their future. As Pappy tells it, the budding musicians are not prepared to sit and wait for next year’s competition.

“We’re starting to prepare from now,” Pappy tells me. “I do a little songwriting. Presently, I have a party soca song for next year.”

According to Pappy, just getting into the Piton SocaStarz final this year was a victory for the youngster who says he’s willing to learn the ropes – and cheer for the other artistes – for now until the right time comes for him to claim his prize. He’s observing the vibe and planning his winning strategy. When his time does come, he said, it will be awe-inspiring.

“I have a long-term plan for my music. I’m already working on a creole something for Christmas. Until the day I die, music will be a continuous thing for me. Music is my passion and music is my all,” Pappy explained.

Balancing music with everyday life is a challenge for Pappy, who has an 8 a.m. to 4:30 p.m. job as a security guard five days a week. He’s off on weekends, which allows him enough time to scribble a few lines of thoughts down on paper that will hopefully become his first Piton SocaStarz title-winning song. But even during his lunch break, Pappy cannot resist the urge to pen a few lines down on paper.

Currently managed by Antonius Calderon, father of two-time Secondary Schools Calypso Competition monarch, NikileDeterville, Pappy said he’s receiving invaluable advice and guidance, including how to avoid the pitfalls of the music business. He thanks them as well as his girlfriend, Carrie, his stepmother and stepfather, the management and staff of the National Community Foundation (NCF), his other supporters and fans, Brian Belizaire, and other fellow artistes.