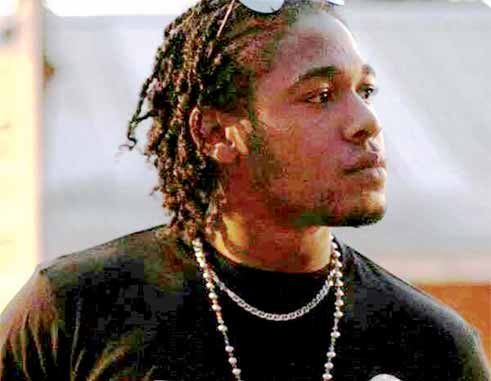 WHAT comes to mind when you see an individual or a group of individuals, young or old, fixated and dedicated to a video game? “Game Zob” right? Well, today’s FITC is here to set the record straight and explain why the world of gaming is so much more than what is perceived by so many.

Valdez Antonio Franklin of La Clery, Castries is a 27 year old professional competitive gamer. He is one of the pioneers of competitive gaming (eSports) in St. Lucia and considers himself to be business focused, jovial, charismatic and a little bit maniacal–all in a neat package that people can easily relate to.

Franklin has played an extremely active role in bringing recognition to the world of gaming in St. Lucia and is currently on the go to persons for any information and help needed in this sport.

Call him crazy, call him passionate but you will see why he will NOT stand for being called a “Zob”

The VOICE: How passionate are you about video gaming?

Valdez: I am very excited about gaming and the many aspects about it. Gaming opens up many avenues beyond just casual entertainment. Pro Gaming has now taken the world by storm. Through gaming and the many Caribbean tournament counterparts, I have developed a very personal and professional relationship with individuals from the various USA FGC (Fighting Game Community) events and even some gaming companies.

The VOICE: What’s the difference between a “game zob” and a pro gamer?

Valdez: Ah yes, the hard hitting question. A gamer and “game zob” are in two totally different classes. “Game zobs” basically play games without goals or competitive reasons. They play any and everything often spending hours playing without any intention of developing some sort of skill. They simply play for pleasure and no reward. A pro gamer or aspiring pro gamer on the other hand is on a higher plain of gaming. They are often the most skilled and generally more technical, tactical and are more comprehensive about the game and its mechanics. A pro plays for glory and is always eager to face other powerful opponents. They are in some ways always sharpening their skill by learning and adapting to new tech. Just like any other sport out there, eSport gamers share the same quality as any athlete in other sports. They’re poised, disciplined and always aim to out do their opponents

The VOICE: Some might argue that gaming is not a sport at all and that is just a recreational pastime for boys and their toys. What would you say to these people to convince them that gaming is a legitimately big deal?

Valdez: Clearly any one who is of that conception is ignorant of what is happening around them. The world the games has evolved and I believe someone dedicating their time to master any activity and compete against like minded individuals is considered a sportsman. I would advise that they use Google on a handset with 4G that they’re paying for and utilise it to further educate themselves about gaming. And I believe in proving people wrong… they will wait and see won’t they?

The VOICE: How long have you been a gamer?

Valdez: From since when I was a boy I could remember my fondest memories of the veteran Lucian gamers who would congregate at my mentor Jerry Charles’ home to take part in afternoon brawls in Street Fighter 2. At the Corinth Secondary School (which I attended) I would host small tournament events at the end of every term with a few of my friends under the supervision of Ms Maraj my music teacher. This passion was shared with my late friend and past student of Corinth Secondary, Walsh aka Macbeth

The VOICE: At any point, did you go through the “zob” stage or did you always see yourself taking your passion to another level?

Valdez: Never. I really saw myself always wanting to push games and grew up having rivals in games such as Street Fighter, FIFA, NBA 2K, and the list goes on. My passion and goal was the development of an eSport structure within the local scene and that passion led me to the “Saucekrew”.

The VOICE: Tell me about “Saucekrew”.

Valdez: The “Saucekrew” was formed by a group of tech and gaming enthusiasts, each carrying their own particular skills and traits to the organisation. Just like the name suggests a sauce, a special blend of ingredients come together to make a savoury gravy. (Laughs) Part of our objective of “Saucekrew” was unifying the youth and providing them with the avenue events to come together at “Saucekon” (Sauce konvention) which is an annual event which encompasses gaming, anime and music. This has evolved over the years since starting in 2008.

The VOICE: So is this world of gaming only for males?

Valdez: (Laughs) That’s far from the truth. It’s comprised of both male and female players and during my cross Caribbean travels I have met a few top female players from around the world who are monstrous, just like any male gamer I know. That’s the great thing about eSports… its unisex, a female doesn’t need to be in a separate division as the males. They can enter the tournament as equals and so be it, beat out the guys. This makes this sport the most accessible and less restricting sport known to man. For instance, even the disabled with enough tenacity and drive can become a top player despite their physical limitations. For example, this guy is truly an inspiration his name is BrolyLegz and he can’t use his hands…only his mouth.

The VOICE: How far has gaming taken you in terms of achievements etc?

Valdez: Gaming has been very rewarding in terms of recognition within the Caribbean and USA and with it came many achievements like becoming friends with some of the best tournament organisers from USA, Eric Big E small, Li Joe Ciaramelli and Larry Shin Blanka , so much so that Eric Big E Smalls and Li Joe started their assistance in developing “Saucekon” into an international grade event. The friendship forged between the pro gamers and myself is another invaluable achievement. I became Vice President of GDLK (Gamer talk for the word “Godlike”) Apparel international and also recently, a union of the Caribbean’s biggest gaming events was formed and I was one of the founding fathers of this wonderful alliance CEA (Caribbean Esport Alliance). Soon after I was elected its first President

The VOICE: What did it take to get you to this level?

Valdez: Well, doing something you love makes it far easier to stay focused and ambitious. But faith has a lot to do with it in many ways. Faith and support from friends, family and public figures kept me positive and determined and part of my attitude is to always prove people wrong…that’s my drive, especially the people who say can’t or nah. Instead of focusing on the negativity I use it to propel me forward. The youth should embrace this too, always go for your dreams and don’t get caught up with criticism of others. I always shoot for the skies despite the shackles trying to keep me earth bound.

The VOICE: There is an age old issue of school boys and girls (mostly boys) who skip school to spend time and money in the numerous game shops around the place, what should be done to curb this behaviour?

Valdez: Responsibility falls square on the shoulders of the arcade owners. They should take to task the role of counsellor and guardian. They must first reject the children for being there without any valid reason. Most times the general public tend to be so judgmental over the sight of children in arcades but sometime a child could be having a tough time in school or home and the child is there trying to get some peace of mind and escape from reality. In some cases, some children just can’t control their impulse to game and that’s where the arcade owner should be strict in their action. I believe if they do the right thing and notify the school or parents the children won’t leave their lessons. Just turning them away won’t do. Positive ways to keep them in school is to award them for good grades and attendance. That way they are encouraged.