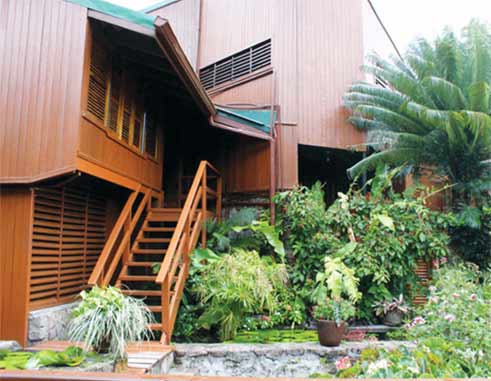 Share this post
SITUATED on a long-running ridge in Soufriere, Ladera Resort is among the island’s most picturesque pieces of real estate. The lush vegetation and non-stop chirping of birds complement a decades-long tradition of fine west coast hospitality.

Initially built in 1970, the property started out as a restaurant but the then group of owners soon spread out a number of villas across the captivating sprawl near the iconic and breath-taking Pitons that dominate the property’s views.

Over the past four decades, Ladera Resort has transformed in phases. The property was sold to its current owner, American Ralph Hooper, about 30 years ago, and has since evolved from a restaurant to a luxury hotel property with its name changing to simply Ladera at one point.

Thirty-seven suites and villas now make up Ladera Resort, along with Dasheene Restaurant where “Haute Saint Lucia dining” is available. Paradise Ridge, which opened two and a half years ago with five villas, just had its sixth villa and Yoga studio opened there about two months ago.

Paradise Ridge is the latest development on the property and the six villas there feature the three-wall concept which does away with the wall that should have been facing the Pitons. Paradise Ridge has larger villas and suites and other amenities.

Ladera Resort is the only property on the island that is among the Pitons and overlooking the two peaks that stand tall out of the Caribbean Sea. All rooms have swimming pools and butler service is available. By the end of October, Ladera Resort will have heated pools in every suite and villa.

Olivier Bottois is Ladera Resort’s VP of Marketing/Operations and has been on the job for the past four years. He describes the Ladera Resort long standing team as “a big family” that is “very close”. Currently, 145 employees – all Saint Lucians – work at the resort.

In a recent interview with The VOICE, Bottois opened up about one of the best-kept secrets on the island’s west coast. Having worked for some of the world’s finest hotels, Bottois’s experience has already begun to pay dividends at Ladera Resort.

“I’m the only foreigner working here and I only hire St Lucians as a policy,” Bottois told The VOICE. “That is because we want to keep our resources on-island and give jobs to Saint Lucians who are all supportive of what we do here. It’s better for continuity purposes as well. We don’t have high labour turnover rates, either. Also, anything that can be done locally, we do it locally.”

Bottois says the resort works with 80 local farmers and fishermen, buying whatever it can from them in order to support the local economy. He admits that it would be easier and cheaper sometimes to buy produce in bulk from large companies. However, he believes in keeping the money here in the local economy.

Ladera Resort is not an all-inclusive property. The resort encourages its guests to eat at its posh Dasheene Restaurant. However, guests can also dine at other restaurants if they wish, taking advantage of a wide range of choices because of Ladera Resort’s partnerships and similar clientele with Sugar Beach, a Viceroy resort, Jade Mountain and Cap Maison, all part of the “Virtuoso” luxury travel advisor network.

“The bulk of Ladera Resort’s clientele comes from the United States, Canada, the United Kingdom as well as wider Europe. We welcome an international clientele looking for ‘Experiential travel’, fine dining, romance and adventure,” Bottois explained.

In the low season, room prices are around US$500 for basic suites and US$2500 per villa at Paradise Ridge.

Over the years, Ladera Resort has racked up a number of international awards. Bottois says that while his team remains humbled at winning awards and accolades, “we don’t want to rely on awards.” The true award, he says, is when the rooms are filled as they are most of the year. Ladera Resort, he says, enjoys an average occupancy rate of 80%.

“That means that you’re good at what you do. Accolades are sometimes more of an egotistical thing where you try to convince people that you’re good and they should come due to the awards. Of course, we have gotten awards and accolades over the past thirty years. In fact, Ladera Resort is the only resort in the Caribbean to ever be rated the number one hotel in the world by Conde Nast Traveler. That’s considered one of the best accolades in the travel industry. We got that honour in 2006,” Bottois explained.

Bottois says it’s always been the vision of the resort’s owner, Ralph Hooper, to ensure that as many products as possible are made on-site at Ladera Resort. For instance, the resort’s team of skilled craftsmen makes some of the finest furniture from local woods, eye-catching pieces that adorn the guests’ rooms and throughout the property. They’ve now taken it to a next level where they actually export furniture that is sold to honeymooners who come to Ladera Resort.

The resort’s talented chef, Nigel Mitchel, was hired 18 years ago by the then Executive Chef, Robbie Skeete, who was really Chef Nigel’s mentor. Bottois promoted Chef Nigel to Executive Chef two years ago. Chef Nigel, he says, knows the product better than anyone else does and his kitchen team has been together for close to 15 years promoting “farm to table” Saint Lucian cuisine.

“Our chefs are all very experienced and understand the concept of Dasheene, which is authentic St Lucian cuisine. I usually take Chef Nigel with me on trips overseas to experience how top restaurants are run by top chefs. That has inspired him to create newer and better presentations and meet world famous chefs,” Bottois said.

Ladera Resort is also big on corporate social responsibility. However, you wouldn’t hear much about that because – as with the many accolades they receive – they prefer to give back to the community without blowing trumpets.

As for feedback about the Ladera Resort experience, Bottois says the most common comments from guests have to do with the authentic Caribbean experience the resort offers. Great emphasis, he adds, is placed on continuous training for staff so as to ensure that the highest standards are met. In order to keep the atmosphere a dynamic one, staff is encouraged to continue striving for higher standards so as to ensure the overall product is not compromised.

With Cuba and the United States now in the process of thawing off their old Cold War stalemate, Bottois said Cuba is going to be a new destination for Americans and benefit from a major cash injection to position it as a new luxury destination in coming years. He believes such an opening of the gateway to Cuba will result in the tourism product in other Caribbean islands being affected.

“The minute the gate is open, people will go there. I think it will take a little more time for them to open luxury hotels because they don’t really have five-star hotels in Cuba. So I don’t think that the clientele that comes to Ladera Resort would go to Cuba as quickly. Differentiating ourselves as a destination is a priority. As one of the first experiential resorts in the world, Ladera Resort remains a top Caribbean destination. However one of our top priorities is to continue promoting our beautiful island as a romantic paradise.” Bottois told The VOICE.