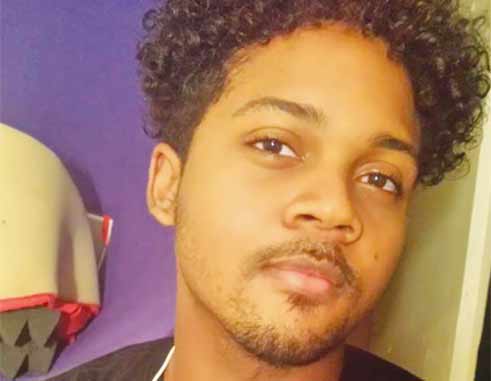 THEY say that laughter is therapy for the soul and I couldn’t agree more.

Today’s FITC is my true testament to that saying because he has single-handedly made my day and turned my frown upside down on many occasions.

Joel Morris is a 21 year old comedian from the north of the island who has seemingly popped up from nowhere and since June this year, has become one of St. Lucia’s biggest internet sensations.

Taking up the persona of numerous characters including his main and most notorious one, Cecilia John, Morris shows the exaggerated versions of the typical “Lucian” situations through short comical videos.

In the videos which range between 15 seconds to just over five minutes in length, Morris can be seen portraying multiple, lightly disguised characters in different scenarios including “What Lucian say at funerals” where main character Cecilia John displays all the stereotypical bad behaviours of locals in the three part topic: at the service, the cemetery and the “blocko” including gossiping, slander and eating in church.

In another video, “The Sidechick Chronicles” Cecilia John is confronted by Joel’s girlfriend over the phone and she responds in the way that only a carefree mistress would”. Then there is “Cecilia John and the Jehovah’s Witness where Cecilia tries to avoid being seen at home, in vain”. As one can only imagine, the jokes roll in nonstop.

Whilst he considers himself to be a “cool guy” in his own right, the extreme personalities will leave you wondering how he came up with the sketches.

On the other hand, Morris credits his ability to be happy and make others feel the same to some difficult life events. He explained: “I have seen people close to me die like flies so that made me take a huge step back and look at life from a different angle. I take time to enjoy things, and I like doing things other people like to do because it pleases me when people can enjoy my company.”

Putting the jokes aside, here is Joel Morris’ story.

The VOICE: You have seemingly appeared out of nowhere and have hit St. Lucians by storm. Where did that knack for comedy come from?

Joel: Well, I love making people laugh. Hanging out with people I always find a way to make them laugh and most times it’s unconsciously because it’s who I am. I get that from my father, definitely

The VOICE: Now it is believed that behind every comedian is a history of pain and heartache…is that the case with you?

Joel: Wow…Hearing this statement, all I can say is that it isn’t false. And that’s the only way I know how to answer this question

The VOICE: OK. How did you come up with the idea for your short videos for Facebook?

Joel: I am a huge fan of good comedy and seeing short skits online, Youtube, fb, Instagram etc, I’ve always wanted to give it a try. People have always been a suggesting I do videos like these so one night I decided to give it a try and the response was incredible.

The VOICE: What goes into creating those videos and how long does it take for each?

Joel: Usually I get random vague ideas that I feel can work, and then I get ready and start recording. I make it up as I go along and I keep going until I feel it’s good enough.

The VOICE: Tell me about your different characters especially the main one, Cecilia John

Joel: I think of the skit I want to do, then I form the characters based on their reactions and personalities which is fitting to the skit, then I put it all together in context. All my other characters aren’t as pronounced as Cecilia John and won’t be making memorable appearances, unless I come up with another main character like Cecilia. I never really had a name for the female character until one night while making the “Since when that’s your role” video, my cousin from south randomly said “Not I Cecilia John!” And I thought the name was hilarious so I kept it. Cecilia John is an embodiment of extreme St. Lucian stereotypes and characteristics. I decided my main character should be a woman because women have all the drama and always have a “roro” going on which is comedic.

The VOICE: Are any of the characters anything like you or anyone that you know in real life?

Joel: I feel like they are a reflection of every St. Lucian including myself. Not everyone is that extreme but to some extent, and also not in a negative way, but in that comedic sense. Most comments on my videos are “This is so true” and “I’ve seen this happen.”

The VOICE: You mentioned that the response was amazing…tell me about your fan base?

Joel: The support has been amazing. Messages, wall posts, comments, people even see me in public and they talk to me

The VOICE: Now although comedy is not something that one would consider a huge earner, if you play your cards right, there are ways that you can get by with your videos. Is this something that you see yourself pursuing?

Joel: Definitely. If the opportunity presents itself, it’s worth considering

The VOICE: On the smaller scale on the other hand, can die hard fans like myself look forward to many more videos in the future or was this just a phase that you wanted to “try out”?

Joel: You can look forward to seeing more videos in the future

The VOICE: OK with that said, what can we expect in the future from the likes of Ms John?

Joel: Expect to see more of how Ms John deals with our everyday situations Lucian style, and a sequel to the side chick chronicles. Also, I have teamed up with another Lucian comedian which was great. Instagram @Dez_tmg…expect to see more features in the future.