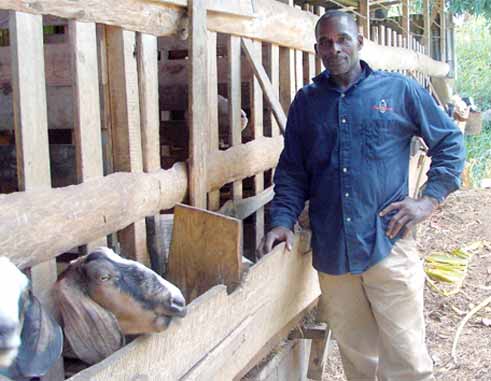 Laborie Farmer Has Found His Niche.

THE ailing banana industry has forced several farmers out of business, but EpiphanusVerneuil is a livestock farmer of Laborie who has taken his talents into goat rearing and doing very well too.

And while other livestock farmers are busy scratching heads and pondering their next move, Verneuil’s main challenge is in satisfying the rising demand for his animals.

“Right now I make seven times more money selling goats than I made selling bananas. The business is profitable. I am unable to satisfy the market…” Verneuil , the biggest goat farmer in the south of the island said.

He said he started rearing goats in 2005 with just five animals and now has approximately 150 in two locations in Laborie.

“When I realized the banana industry was not doing well, I said to myself that I had to find some other way of making a living and not depend only on bananas,” he said.

According to Verneuil, farming is not new to him. In fact he comes from a farming family with several of his brothers involved in the sector , and doing well too. “We are a farming family. We love the soil…” he said.

He said as a boy going to school his father usually took him to his farm where he planted bananas and other tree crops.

Verneuil said after leaving primary school, he decided to continue farming, planting bananas on a large scale, and doing well in the days when the fruit was known as “green gold”.

“I never worked for anyone in my life. Al I know is farming. I fed all my children and sent them to school through farming. Farming gave me all what I have today,” the 53-year said.

According to him, he was encouraged to go into livestock farming by another farmer. “People all over the island come to Laborie looking for me to buy goats. On numerous occasions I have to disappoint them because I don’t have enough to sell. During the Christmas season demand is even greater,” he said.

Verneuil said at the moment he wants to ensure that he maintains a certain number of goats, especially females, so he can deal with the high demand in the long run.

While some people may describe farming as a very difficult pursuit, Verneuil holds a contrary view, because he has mastered the technique in livestock farming enabling him to significantly reduce his operational costs. He said he hardly feeds his cattle on imported feed, adding that he has learnt from other livestock farmers in the Caribbean how to use local grass to feed cattle, which makes them grow healthier.

“I feed my goats once a day with elephant grass, mixed with other grasses. I also add molasses and a bit of imported feed to it. The goats enjoy it… It makes them grow fast and keeps them healthy” he explained.

Verneuil said that he is awaiting the completion of the Beausejour meat processing plant to further develop his business. And he is calling on the government to pursue the matter with urgency, because of the positive impact he feels the Plant will have on the agriculture sector here.

“When the meat processing plant opens, my business will be much more profitable.. I can’t wait for it to open…” Verneuil said.

He is unperturbed by the threat of competition from other farmers who are also venturing into goat rearing. He believes that he is way ahead of them all.

Verneuil does not understand why young people are not attracted to farming, given its potential.

“Young people refuse to go into farming and that is where the money lies. ..Some of them are just lazy, They just want fast money,” he lamented.

He claims to have a passion for farming and sometimes spends the whole day on his farm with his goats.”They (goats) are the ones that gave me money, so they are the ones I must find time for,” he said.