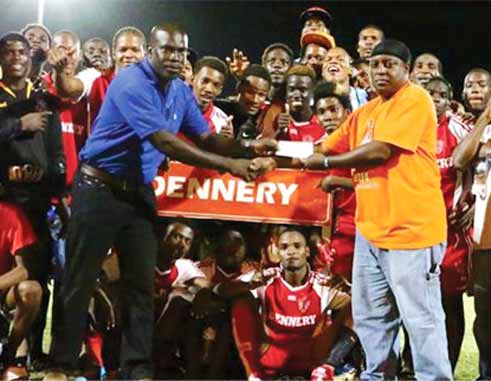 Sponsored | Article continues below
Share this post:
DENNERY emerged victorious in the Blackheart “Champion of Champions” Football Festival, winning in Saturday evening’s final at the Soufriere Mini Stadium in front of an appreciative crowd of fans.

And in the grand finale, Dennery beat Micoud 1-0 to win the east coast derby, the Champion of Champions trophy and $2000.00, Micoud, for their effort walked away with $1000. 00. RidelStanislaus was the goal scorer for Dennery in the final.

The 2015 Blackheart / SLFA Knockout Football tournament is set to kick off on 19 September at the Beausejour Cricket Grounds. The tournament this year will be played BCG, the Phillip Marcellin Grounds in Vieux Fort and the Soufriere Stadium.

A number of warm up and promotional events as well as playoff matches will be held ahead of the kickoff. Four teams will be involved in the playoffs this year: Anse La Raye, Mon Repos and Choiseul, who did not qualify for the tournament last year, and Desruisseaux, last year’s worst loser in the opening round.