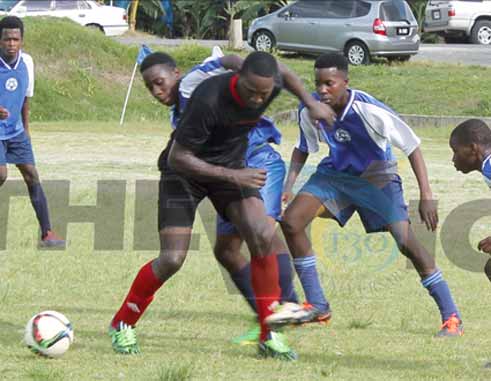 Thirteen goals were scored in the opening round of the Roseau Valley Knock – Out Football tournament played at the Marigot Playing Field over the weekend.

In game 1, Derandeau FC defeated Roseau Valley Under – 18s 3 – 1 in a game dominated by Derandeau in the first half. ShervonBosiville opened the scoring in the second minute then Gibson Louis doubled the scoreline in the 13th to leave the half time score 2 – 0.

On the resumption Derandeau nosed ahead again when Raheem St. Mark received a free ball on the flank, dribble past three under – 18 players to strike home a right foot shot to make it 3 – 0 in the 56th minute of play.

The Under 18s kept the pressure on as they made several goal raids on their opponents, but with lack of strength in their legs towards the end a number of their scoring chances squandered.

In the 62nd minute Referee Mervin Charles awarded the under – 18s a free kick just outside the box that was beautiful converted by central defender Doneal Lionel with a right foot shot that went around a six man wall to make it 3 – 1. That’s how it stayed up until the final whistle.

In game 2, Marigot FC and J. Connection played to a 2 – 2 draw, but Marigot FC advanced 5 – 4 on penalties. The goal scorers for Marigot FC – Fabien John in the 21st and Mandela William in the 59th, for J. Connection Narrayan Wellington in 72nd and Tobie James in the 81st minute.

On Sunday, TC Foundation breezed past Dominators 3 -0 with goals from Kenya Sonny, Angus Charles and Ruben Sandiford, while in game 2, R.V. Juniors had a 2 – 0 win over T. Valley FC with goals from Nicky Henry and Alex Antoine.