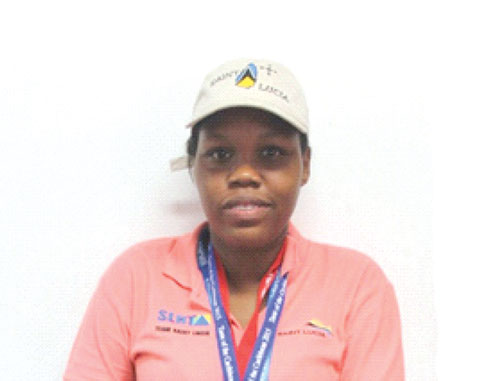 IN every walk of life, dreams exist and so, too, does the possibility of realizing such dreams. Take the case of 21-year-old Edna Butcher of Cap Maison, for example, who saw her dreams of being a chef during her years as a Corinth Secondary School student some years ago materialize faster than she ever imagined.

Originally from Bocage but currently residing at Rose Hill, Castries, Butcher has been employed with Cap Maison since last November. Before then, she worked at Coco Palm for about three years. Her work detail at Cap Maison is pretty straight-forward: mostly working the lunch shift and specializing in Creole and Caribbean cuisine.

Butcher recently scored some huge points in her relatively-new culinary career. But before you get to the dessert, you must first savour the main highlights – or main course, if you will – that have led to her recent achievements.

While at Corinth Secondary School, she did Food and Nutrition at the CXC level, earning a Grade 2 in that subject at the Caribbean Secondary Education Certificate (CSEC) exams. She later attended Sir Arthur Lewis Community College (SALCC) where she studied Food and Beverage Operations.

During those SALCC days, she did some internships at various hotels, including Sandals Halcyon, Sandals La Toc, and Landings before eventually beginning employment at Coco Palm. While she was still employed at Coco Palm, Butcher was selected to participate in the “Junior Chef Factor” competition held here last year. She eventually placed second in that competition and soon left Coco Palm for Cap Maison.

It turns out that when this year’s Saint Lucia Culinary Team was about to be selected to participate in the Taste of the Caribbean competition, her name came up as an excellent choice. However, as a matter of courtesy, some people felt that the “Junior Chef Factor” winner should be chosen instead. As luck would have it, she did well enough to earn that spot on the culinary team.

The news of her selection to the team was a bittersweet one for her, however. Balancing a busy work schedule with the intensive eight training the seven member culinary team – which included chefs and bartenders from various hotels and restaurants across the island — had to undergo in preparation for the Miami-based competition was not as easy as preparing an omelette. Preparing to square up against the best competitors in the region would definitely be the hottest kitchen she would enter. They had to learn from the best.

“We had training sessions for about one to two days a week over those eight weeks,” Butcher said. “We had Chef Robbie Skeete (of Caribbean Pirates) and Chef Rodroy Thomas of Sandals Halcyon) preparing us for the competition,” Butcher said.

Butcher said adjusting to the rest of the team was not difficult since they immediately cooked up a friendship based on hard work and enough laughter to complement the best three-course meal. Even the competition itself, she said, was not a nerve-racking experience for her, especially since she prayed a lot and her team placed a lot of confidence in her. It seems she had the right mix of ingredients on her side.

“I knew I could have done it, but I didn’t know I would’ve placed first in that short space of time,” Butcher admitted “I just did my best and made sure I had and did everything intact.”

For the competition, participants were given several ingredients, including two mystery items and four items indigenous to each competitor’s respective culture. She said she was given “a really bad piece of beef” and scallops, the latter being her main ingredient. She prepared a sea almond crusted scallop, meatballs stuffed with curried creamed cheese, and a guava and Chairman’s Reserve Rum infused with red wine sauce. She was not done yet: a sweet potato mash, yam chip and some sautéed vegetables topped it off.

When the gold medal category for the competition was announced, Butcher said she was delighted to learn that she had won. Delight turned into astonishment when she was announced as the overall winner. For her efforts, Butcher picked up the Junior Chef of the Year title and Junior Chef of the Year in the plate category. The icing on the cake was that Butcher was also inducted into the Taste of the Caribbean Hall of Fame!

As part of her rewards, Butcher will receive a US$2500 scholarship. For now, though, she remains grounded despite her wins and she continues to express gratitude to all those who have contributed to her growth and success in the culinary arts. She said she had received a great deal of support from many people, whether financial, technical and other means, including great advice. She singled out chefs, Richardson Skinner, Craig Jones, Chef Nico and Chef Rodroy, all of whom she described as “big inspirations”.

Thus far, Butcher has realized dreams that she never thought would materialize in such a short space of time in a tourism sector that many people still see as low wages being paid for menial work. With Butcher demonstrating that spirit of hard work and dedication to her craft, many might be forced to rethink that posture. In fact, she’s already dreaming more dreams: she plans to own her own restaurant someday and get into the catering business.

Her advice to aspiring entrepreneurs: “No matter what you go through in life, there’s always a place for you to grow and make something of yourself. Never let anyone or anything get you down. If you see it, just go for it.”

Word through the kitchen vine is that Butcher’s recent achievements, however admirable, might just be the tip of her culinary pursuits. With her level of dedication to her craft, imagine what a stellar career she can have if she continues to cook up the right winning ingredients.