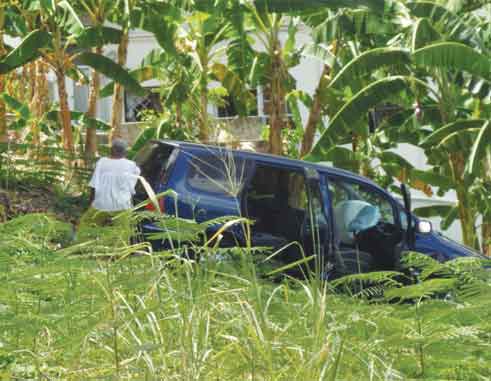 A senior lady escaped a possible tragedy, after the navy blue Honda that she was driving ploughed downhill next to the Rambally Funeral Parlour off the Calvary Road, on Wednesday morning.

The exact cause of the accident was unclear, as the driver, who was the lone occupant of the vehicle at the time, was unhappy with the presence of the media and was in no mood to give an account of her ordeal.

However, from first glance, it would appear that the driver escaped unscathed after her airbags were deployed.

Whilst the location of such an incident (being next to a Funeral home) was uncanny, disaster was averted after the vehicle was stopped by the stump of a fallen tree.

Although the driver refused to speak to the media, she was heard saying that she was thankful that she had escaped without injury, and that this miraculous incident just showed that she was indeed a child of God.

Although a wrecker was called to retrieve the vehicle, mechanics were able to drive the car off the scene as the damage to the vehicle was minimal.