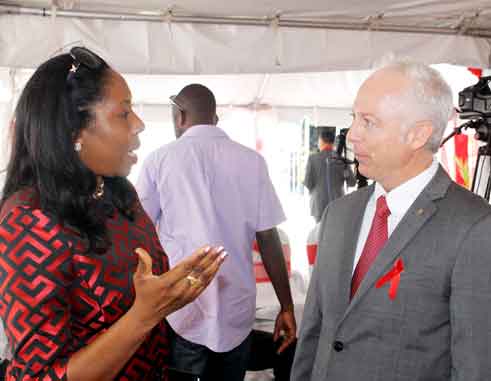 EARLY testing for HIV and breaking down the wall of discrimination were the principal messages espoused when the 8th annual Regional Testing Day was held on William Peter Boulevard last Friday morning.

The official media launch was held in Saint Lucia for the first time. The first regional lauch was held in 2008 and similar launches have been since then in other Caribbean countries.

Scores of healthcare professionals and other key stakeholders were on hand to either highlight the effects of the scourge and efforts being made at stemming it or simply to gain more insight on the progress being made thus far in the region.

According to Executive Director of Caribbean Broadcast Media Partnership (CBMP), Dr. Allyson Leacock, most of the testing this year will take place on June 26. Key populations, she said, will be targeted in many countries on June 27 while the faith-based community will be targeted on June 28.

Prime Minister Dr. Kenny Anthony also spoke at Friday’s media launch of the campaign, saying the Caribbean had had enough of the disastrous effects of HIV/AIDS. The Prime Minister added that the world has been united against HIV/AIDS in Millennium Development Goal number 6 (whereby) the nations of the world have collectively committed to halting and reversing the spread of HIV/AIDS globally.

“While we have seen remarkable successes in other regions, we have still fallen short of our targets in our part of the world,” Dr. Anthony said. “Unquestionably, a redoubling of effort is needed. We have become complacent and lulled into a sense of insecurity, primarily by the advance of medical science.”

Dr. Anthony reaffirmed government’s commitment to putting an end to HIV/AIDS in the region and the world. To win that battle, he said, would require “winning our awareness, minds and habits.”

Scotiabank Saint Lucia Country Manager, Philip Cross, said the Regional Testing Day programme is one of Scotiabank’s largest philanthropic activities involving over 30 Scotiabank branches in 20 Caribbean countries. He reaffirmed Scotiabank’s commitment to being a key partner in the fight against HIV/AIDS.

“Scotiabank remains steadfast in our commitment to fighting HIV and the associated stigma and discrimination that too often can prevent people from getting the testing, treatment and care they need to protect themselves and others,” Cross said. “And this, of course, exacerbates and prolongs this epidemic,” Cross explained.

Data collection is another benefit of getting tested since healthcare professionals can get a sense of how their efforts to curb the scourge is faring. Attracting appropriate funding to fund public awareness campaigns are also plusses identified by Dr. Eugene.

According to statistics provided last Friday by Dr. Eugene, some 1,032 confirmed cases of HIV have been reported in Saint Lucia since 1985. Before antiretroviral therapy was made available locally in 2006, there were 286 AIDS-related deaths. Since 2006, however, there have been 68 deaths, she said.