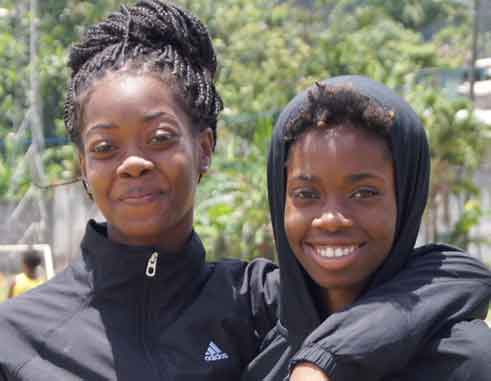 Fifteen year old Chloe Edward, a student at the Vieux Fort Comprehensive Secondary School/Campus B has her eyes set on a place on the St Lucia team for the 2017 Commonwealth Youth Games

THE VOICE caught up with Chloe recently at the Mindoo Phillip Park while she was participating in the St. Lucia Athletic Association/World Athletic Day celebration. Chole hopes to make a name for herself in track and field.

She told THE VOICE: “I have been in track and field for the past seven years. I started competing in the 100m and 200m, then I went into long jump and high jump. I have recently turned to the hurdles and hopefully I will master it and be ready for the Commonwealth Youth Games in 2017”.

Chole admits to growing up in a sporting family. “My mother, Patrina Haynes Edward who is from Soufriere, played netball, and my father, Camillus Edward who is from Laborie, played football and he also did a bit of track and field. My older sister Ashleen Edward is also a high jumper in and my little sister Kimani Edward is likewise in track and field. She is 7 years old.

“Right now I am trying my best by working hard so I can represent St. Lucia at the Commonwealth Youth Games in 2017 right here in St. Lucia, and long term, I am aiming for the 2020 Tokyo, Japan Summer Olympics”

Chole is currently training for the St. Lucia Athletics Association’s National Individual Track and Field championships at the end of June. She said: “Right now I’m training on Tuesdays, Thursdays and Saturdays at the George Odlum Stadium from 4:00 p.m to 6:30 p.m. Some days the training can be moderate and intense and other days it’s just short sprints”.

Chloe is looking to improve her personal best in the high jump. She said: “My current personal best is 1.50 metres but I would like to at least take the bar up to 1.60 metres. It will be a good way to end the 2015 track and field season”.

Chole does not have a favourite athlete on the local, regional or international scene, but she admires Jamaica’s Shelly Ann Frazier-Price for track, and high jumpers St. Lucia’s Janelle Scheper and Levern Spencer. She is also inspired by sister Ashleen although adding: “I am hoping to beat her sometime soon”.