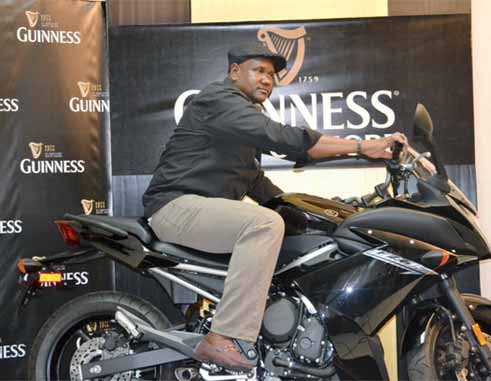 A massive crowd looked on with bated breath as out of thousands of entries one lucky name was pulled from a giant drum on stage.

The event was the grand prize draw for a 2014 Yamaha FZ6R Motorcycle which was part of the month-long Guinness Rev Up Under the Crown Promotion which saw winners of various prizes from around the island.

It’s been an exciting few months for loyalists to the brand who have had the chance to win coveted prizes such as free Guinness and cash, $100 Fuel Vouchers, smart phones from DIGICEL, Beats Headphones, Apple Ipods, $250 grocery vouchers, LED Smart TVs and lots of Guinness merchandise.

It all came down to the final prize of the Yamaha Bike on April 10th at the Gros Islet Street Party. The momentum built as the crowd enjoyed the music and were entertained by local band Phase Two and the Guinness Ladies. Finally the climax came and Anthony Evans of Marisule, Gros Islet, was announced as the winner.

Though he was not in the crowd that night Evans was officially awarded his prize on Wednesday at a handover ceremony and he could not have been more grateful.

“I didn’t know I had won until Saturday morning when I got a call from a friend. I was in shock and I really started to celebrate when I got the official call from Guinness,” explained a smiling Evans. “I had a good feeling when I entered the promotion but we all think we will be lucky I guess. It’s been quite a week with people congratulating me and I am so happy to have won.”

“This promotion was a great undertaking and judging by the equally great response from Guinness consumers we are on the right track. What added to the momentum was our Rev Up road shows which took the grand prize around the island for display,” Henry noted.

“We gave away some great prizes such as Smart TVs, Smart Phones, Cash, and Free Beer along the way and had an opportunity to really engage our customers. We also recently launched our new look bottle and we assure our consumers that there are still more great things to come from the brand this year.”