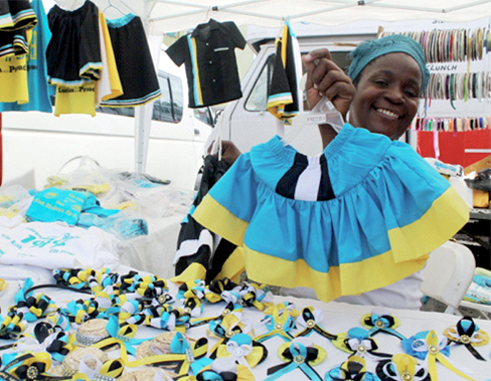 FOR many Saint Lucians, this Independence Day might serve up yet another opportunity to question what the significance of being independent is really all about. That is certainly not the case with city small businesswoman Sera Avril.

For many years now, tapping into her creativity has continuously paid many dividends. As does the definition of being an independent nation is suggestive of standing on one’s own, Sera has been using what works best for her to escape a life of dependence on others.

Originally from Soufriere but residing in Castries for over 30 years, Sera started being creative from her youthful days by having a strong passion for the arts. She began doing crochet, later moving on to pottery and sewing. Recognizing that Saint Lucians were not a patriotic enough people, she decided some years ago to start up something for Saint Lucia. It turns out that she had some part to play in changing the tide on local pride.

“About six years ago, I started my small business and gradually realized that the people were beginning to be more patriotic. So I started making corsages, tiaras and headbands for sale. Later on, I began making skirts and outfits for kids and adults. Right now, I have ventured into making tee-shirts and other things,” Sera tells me.

This Independence season, she intends to keep that sense of national pride going as she decks out her tray on Lower Darling Road with some of the best pieces of nationalism money can still buy: skirts, baby tees, ladies’ strapless tops, men’s vests, tiaras, hair bows, corsages, and clutch and side bags. All items are made from materials sharing the same colours with our national flag – blue, gold, black and white. As is usually the case, customers can expect something different this year from Sera.

“My customers love whatever I give them. I don’t do the same things every year; I try to be very creative by not giving them the same thing. Every year, I ensure that my standard goes higher. So it’s never a problem with my customers. In fact, most of the customers I have today are the same customers I had when I started out. They even bring other people with them when they come to buy my goods,” Sera explains with deep pride.

If you think Sera’s portfolio is limited to just the Independence season, think again. She also creates pieces for Jounen Kwéyòl. As is the case with Independence, she says she tries to marry Saint Lucian culture and way of life into her Jounen Kwéyòl pieces. The culture of a people, she says, must be nurtured, showcased, appreciated and respected.

“I love Kwéyòl because it’s our culture. People don’t speak much Kwéyòl right now but I’ve already taught my children that Kwéyòl is very important to us. This is our culture. This is part of who we are,” Sera says.

As good as business gets, Sera says she still faces what she thinks is an undue burden as a small businesswoman. While she has no qualms about saving up all year to purchase raw materials for her trade from the United States and China, she believes local customs officials need to cut a small businesswoman some slack.

“Customs always gives me a big hit because they consider that since I’m a businesswoman, it’s big money I’m making. Apart from that, I’m cool,” Sera notes.

For anyone walking past her tray in the city, catching a glimpse of her items definitely evokes some level of interest. The sheer high level of creativity Sera puts into each piece she makes elicits a second look. But just how did Sera come about creating these pieces of trendy craft that are now catching so many people’s attention? As she tells it, the answer lies deeper than the surface.

“To be honest, nobody taught me much of what I know. Having a passion is something that comes from your soul. It comes from within. So having the passion led me to believe that God created me and gave me something called talent. I intend to use that talent because I see creativity in every aspect of things,” Sera explains.

Also a hot dog vendor, Sera is clearly exhibiting that she has the ability to diversify her business portfolio. In fact, she is also an events coordinator and runs a business –CC Bridals — planning weddings and parties. Taking on many roles, she says, are challenging, but she finds fulfilment in being her own boss by offering her customers great quality products and services at the right prices.

“I’ve been self-employed for many years now. I do not depend on the government to give me a job. I go out there and create employment. Creating and being self-employed is my form of independence as well. That’s why I’m so strong at it. Maybe the next thing I’m going to do is to shine shoes because there’s nobody shining shoes here,” Sera tells me with a dead seriousness in both her eyes and voice.

This Independence, Sera is imploring Saint Lucians to express their nationalism in as colourful a manner that our blue, gold, black and white flag will allow. While it should not always take a specific season to build that spirit of nationalism, she suggests that charity begins and ends with Fair Helen.

“Saint Lucia is our home. We need to have pride in our country. Even Saint Lucians who go overseas and decide to not come back are missing out on a lot,” Sera says.

To get a piece of Independence from Sera, you can contact her at 489 9991 or check her out at the intersection of Jeremie Street and Lower Darling Road, Castries, where she has her colourful tray of goods. She also takes large orders for items.