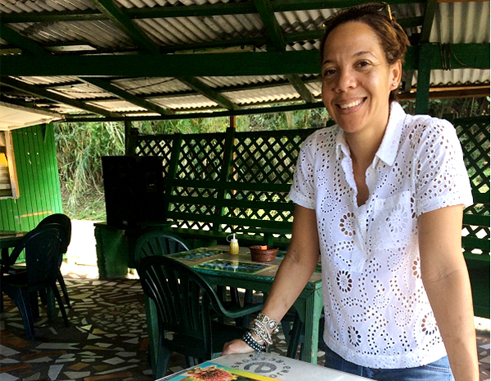 ‘Hey, you look like Nina Compton!” My traveling companion and I had just set foot in the flamboyant covered market of Castries, the capital of St. Lucia, and instantly, shrieks, followed by winks and wide smiles erupted around us. “Aren’t you Nina?”

That is not merely because she is the daughter of the late Sir John Compton, “Father of the Nation” who, in 1979, spearheaded the independence of the island and served as its first prime minister. It’s because in 2013, Nina Compton was invited to compete on Bravo’s “Top Chef: New Orleans.”

“It was life-changing,” she said.

When the show aired, Nina, then 35, was chef de cuisine at Scott Conant’s lauded Scarpetta in South Beach. Using the impressive technique she learned while working in 2000 for iconic French chef Daniel Boulud in New York to cook special dishes using the Caribbean ingredients and flavors of her past, Nina seemed poised to win the finale. An upset left her the runner-up, but she was awarded the show’s “fan favorite” designation and became an overnight celebrity, especially on St. Lucia.

“The entire island was rooting for her,” said Taribba do Nascimento, a local handbag designer. “It was all over the news and people went crazy. Her food was unapologetically St. Lucian.”

She may not have won “Top Chef,” but that December day at the market, while Nina, a slender silhouette in denim shorts and prim white shirt, inspected the produce, I felt I was walking through town with Kate Middleton.

“Green figs, anyone?” she asks the stand mamas hovering around her.

“Figs?” I wondered to myself. “This isn’t Tuscany!”

But I had a lot to learn about St. Lucian cuisine. A few months earlier, hearing that Nina and I would be on the island at the same time — she researching an upcoming cookbook (after “Top Chef,” the government named Nina the island’s “culinary ambassador”), and I attending a wedding — I asked whether she would take me on a gastronomic tour. I had eaten my way through jerk chicken and stuffed crabs aplenty in the Caribbean, but I was intrigued by St. Lucia’s turbulent history and eager to seek its culinary legacy in local kitchens.

Before the British finally took possession of the island, in 1814, the flag went back and forth between England and France 14 times in 150 years. Today, most of the island’s population is of African descent, with a significant East Indian contingent descending from workers brought in to save the sugar industry toward the end of the 19th century.

Back at the market, Nina explains: “We call unripe bananas ‘green figs.’ And salt fish and green figs is our national dish.”

“Salt” and “unripe” didn’t exactly conjure gastronomic pleasure, but at Sylvia’s Place, a cluttered blue-and-yellow kitchen Sylvia Jn Baptiste has run for the past 16 years in the back alley of the market, delicious cod flakes sprinkled with garlic and peppers balance the sweet, smooth banana logs perfectly.

“I was born on Barbados, where nothing grows,” Jn Baptiste says. “Here, everything is local.” She gets to her kitchen at 4 a.m. except on Fridays and Saturdays, when she opens at 1 a.m. so revelers can restore themselves with her bouillon, a pigtail broth rich with lentils, spinach, green plantain and potatoes or her flying-fish fry, as fresh as it gets, straight from the fishermen’s stall around the corner.

A brief nod from Nina to the “coconut man” a few steps away, one decisive machete strike, and off comes the greenish top, revealing flesh as white as a cotton cloud. In goes the straw, and I melt in refreshing coconut water paradise.

Soon it’s lunchtime, and we step out into the sun. Downtown Castries, cradling its bustling harbor, teems with local office workers in shirt and ties and dazzled tourists trickling from colossal cruise ships. But we leave the town behind and drive a few miles to the busy intersection where a sheet-metal roof encircles two towering almond trees that watch over the eatery known as the Hardest Hard. Plastic chairs and rickety tables make up this landmark where Evelyn and Julian Lagon cook up some of the best food on the island.

“People also call us ‘Under the almond trees,’ ” said Evelyn Lagon, the compact, spirited owner, as she scurries her smile around. Spiny lobsters stuffed with dasheen, a root vegetable similar to taro; braised conch with onions, peppers and garlic; and my personal favorite, stuffed trunkfish. The flesh is meaty and almost candied with tangy creole sauce redolent of lime and chives.

Later that night, Nina takes me to Laurel’s in Bois d’Orange. “I don’t like rules, man,” said chef-owner Laurel Butt, straddling a chair in her chef whites and yellow pirate head scarf. And she certainly makes her own: The fritters are made with breadfruit; curry chicken could have been prepared in Mumbai; and bread rolls (tété pain in creole) are baked and sold throughout the day.

Early the next morning, we drive to Prudee’s House of Roti, by the side of the road in Gros Islet. “Do you believe in God?” asks owner Prudentia Raymond, her eyes sparkling at the sight of Nina wolfing down a plump chicken roti. “I had a vision for this place.”

Nina says that the roti, a stuffed flatbread with chicken or fish originally from India, has become a St. Lucian staple. “We eat French boudin, we stuff our local fish with root vegetables from Africa, and we jazz up our lives with Indian spices.”

After the roti, I can’t resist Raymond’s fragrant “cocoa tea,” the St. Lucian version of hot chocolate made with local cocoa, nutmeg, cinnamon, bay leaf and lime peel. “My recipe was passed down from Grandma,” says Raymond, smiling.

On Friday night, while Nina visits family, I head down to the “Jump Up” in Gros Islet, the weekly street party that draws locals and foreign beatniks for an all-night dance marathon under the stars. But first I eat at nearby Flavours of the Grill, the pastel restaurant where chef-owner O’Nell Daly cooks dreamy christophine (chayote squash) gratin and moist banana bread I wash down with local Piton beer. The line snakes around the corner. “I’d rather only feed 20 people at a time and make them happy,” Daly says.

The next day, Nina and I leave the busy and nicely groomed resorts of the north and happily head south for the two-hour drive toward Soufriere, the former French-colonial capital, and the rain forest. Soon, I feel we’ve crossed onto a different island. The winding road takes us along dark volcanic beaches where the clear water reflects the emerald green of the trees, and then, further up, ripples of hills dotted with banana plantations. Another bend and suddenly the two Pitons, forest-covered lava spires, emerge more than 2,300 breathtaking feet high from the sea. When we finally pull into Fond Doux Plantation, it seems a magical curtain of foliage has lifted just enough to allow us in.

The French estate-turned-resort, still a working plantation, is the brainchild of Eroline and LytonLamontagne, who cultivate cinnamon, tamarind, mangoes, dasheen, grapefruit, guava and most of what is served at their table.

“On St. Lucia, the spices and flavors make me feel I’m home,” said Riya Sengupta, a guest who was born in India.

Frolicking in the kitchen, Nina shows the staff her own take on green figs and salt fish. In just a few minutes, she rolls plantain dough and presses it into gnocchi she pairs with stewed cod sprinkled with chives. I watch her mix local tradition with experience and a dose of inspiration as she invents her own delicious dish.

In the evening, as the sun disappears behind the tree canopy, cueing a chorus of birdsong, we dine with new friends in the cool forest breeze. On my plate, I taste Africa, India and traces of French creole specialties, all with a British accent. In fact, I taste St. Lucia. Think I’ll have seconds.