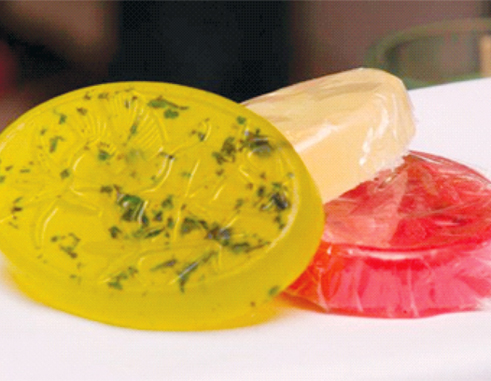 ARUNDEL HILL resident Isaiah Charles is among those who can testify that sometimes the light at the end of the tunnel can often be from the wick of a handmade candle.

Ever since he started his candle-making about five years ago, Charles still finds himself burning the candle at both ends as he continues to push the creative envelope.

It all started when he was on the final semester of his Agricultural Science course in the United States some years ago and a perennial stomach ailment flared up. As a therapeutic gift, a fellow Saint Lucian student at college gave him a scented candle as a gift. He had a work permit at the time but could not work because of his ailment. Upon being told that the candle he was given was hand-made, the idea popped into his head to start his own business making candles.

Living in Brooklyn at the time, he felt he would create a spark among the Diaspora by making candles infused with Caribbean scents and influences. He thought about making candles in the shapes of the Caribbean’s many territories but found out that purchasing the first mould for the candle-making process would set him back US$1000 and a further US$50 for each additional country’s mould. At the time, he had only US$400 a friend had given him.

The lack of adequate funds forced him to piggyback on his creative boyhood days and view a few DIY videos on YouTube. He eventually made his first mould himself, a 6-inch-tall map of Saint Lucia, creating his first candle in that shape afterwards. Candles in the shape of other Caribbean territories soon came, lighting up the passion for his candle-making days to grow.

Not content with just making candles, Charles soon began making soaps, starting with glory cedar as a main ingredient. Upon his return to Saint Lucia in late 2009, he continued to make his candles and soaps, using a variety of shapes and sizes. His business, St. Lucia Novelty Candles & Soaps, was registered in May 2010 but really began to resonate with customers in December that year, by which time there was no turning back on his creative ideas.

Today his 20-plus collection of candles are in the form of islands, pillars, coconut shells, coal pots, torsos, hurricanes, cupcakes, rainbows, containers and cocktails. Candles with embedded spices and names are also available. He uses many local raw materials and plants to create his candles and soaps. His 40-plus collection of herbal and regular soaps come in a variety of shapes, including banana, mango, lime, love apple, cocoa pod – with relevant scents. Charles is even contemplating making a candle in the shape of former Prime Minister Sir John Compton holding a flambeau.

Few things in business can ever beat an idea that continues to shine and yield great rewards. Ever the entrepreneur who refuses to dim the light on any fascinating idea, Charles recently added confectionery to his list of items, producing flavoured novelty sweets that come in various shapes and themes. His Valentine’s collection of sweets is already receiving widespread interest. He even has intentions of making shampoos and air fresheners.

“The thing about it is that my mind doesn’t stay idle,” Charles says. “I’m always thinking of something. The creativity is always flowing, so I create new items all the time. Just being able to create something concrete that came from my imagination is one of the best things that have ever happened to me.”

Charles cited lack of working capital and hefty customs duties on importing raw materials as some of the main factors that often get in the way of his business. Initially, the hotels were interested in his products but later stopped buying, citing packaging as one of its main concerns. To that end, he is currently working on improving packaging standards so as to increase his products’ appeal to customers. He seems willing to go the distance for his customers, accepting orders for custom-made items.

“You can get soaps designed specifically for you, scented with the fragrance you like. I have made candles with people’s names on them. I also do the same with soaps. You can pretty much get candles and soaps for any occasion,” Charles explains.

The soaps are priced at $10 per bar and the candle prices range from $5 to $100. The items are ideal for gift baskets for any occasion. Candles can be purchased at Noah’s Arcade and Bagshaws but candles, soaps and sweets can also be purchased from Charles by calling 286 3317 or 723 0710. You can also send him an email at cisaiah@hotmail.com or go to the business’s Facebook page, St. Lucia Novelty Candles & Soaps, to see samples of his products.

Thus far, Charles seems pleased with the light that has brightened his business since that Brooklyn moment when he was given that handmade candle as a gift. The flame, he says, continues to burn every time he gets positive comments about his soaps, candles and sweets. Recognizing that nothing in life comes easy, he seems poised to rely on the trial and error mantra, learning from each step of the way the light shines for him.

“One of the challenges I often face is the lack of knowledge. When I started off, there were things that I didn’t know. Starting off in a very difficult time means that one can make mistakes,” Charles says.