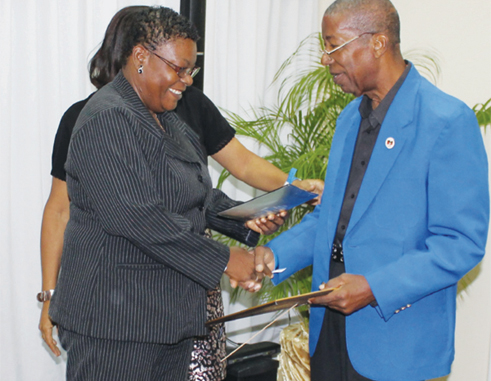 Arthur who was appointed coach of the St. Lucia National Women’s team in 1990, a position he held until 2002, has been ill for sometime.

It was under his guidance as coach, the St. Lucia team was Double Crown Champions of the West Indies Women’s Cricket Federation Tournament in 1998 and 2001, winning both the League and Knock Out championships. It was as a result of that repeated performance in 2001, St. Lucia gained nine selectees on the West Indies Trials Squad.

Arthur expressed thanks for the gesture and wished the ladies well in the continued development of women’s cricket on the island.

The former policeman and coach was also recognised by the SLNCA at their awards function last year, for his twelve years of invaluable service, selfless and significant contribution to the development of women’s cricket in St. Lucia.