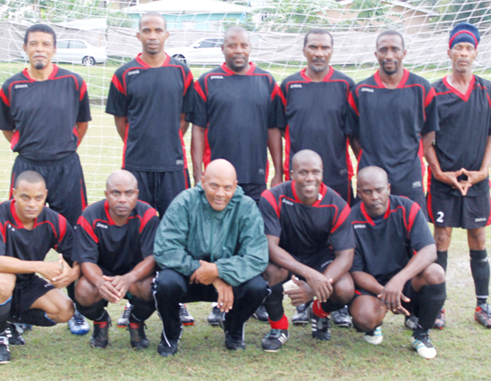 THERE was more heavy scoring in Veterans Football at the weekend as the final set of preliminary matches were played at the Marchand Grounds.

Twenty four goals were scored in four of the six matches which were played as the tournament, organized by Veterans in Sports Inc and sponsored by Caribbean Alliance, continued.

On Saturday evening only one of the three scheduled matches was played.

There were wins by default for Congorians and Gros Islet over Micoud and Mabouya Valley respectively, who did not turn up for their matches.

The one match that was played Saturday evening saw Caricom Masters come out with a one nil upset victory over defending champions VSADC.

The action continued on Sunday evening with all three matches scheduled being played.

In the first match Soufriere booked their place in the quarter finals with a 6-2 win over Nyabinghi.

Former champions Vieux Fort South had it all their way humiliating Prophets and Kings 14 goals to one, while in the final encounter of the evening Anse la Raye and Dennery All Blacks played to a goalless draw.

The preliminary stage of the competition is now complete with the eight quarter finalists decided. They are: Caricom Masters and VSADC from Group A, Vieux Fort South and Gros Islet from Group B, Dennery All Blacks and Anse la Raye from Group C and Soufriere and Behind the College All Stars in Group D

The quarter finals will be played at a date and venue to be determined in January.

Accompanying this ban is a $1400.00 fine which must be paid before any of these teams can participate in any activity of Veterans in Sports Inc.

The teams in question are Micoud Veterans, Desruisseaux and Mabouya Valley.