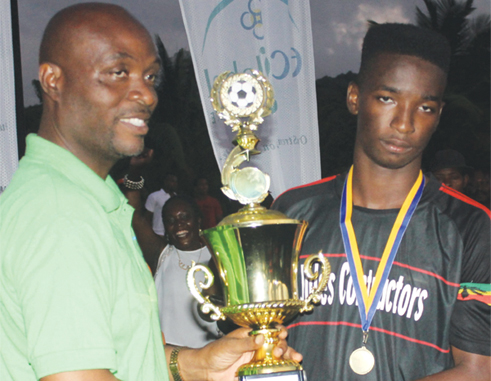 IN the presence of a huge crowd at the Grand Riviere Playing Field, the Mabouya Valley Youth and Sports Council drew the curtains on the 5th Edition of the EC Global/Mabouya Valley Under -21 Football Tournament on Sunday.

In the third place play off, Aux- Lyons United Sports club defeated their arch rivals Rovers United 3-1. Opening the scoring for Aux-Lyons United was Julius Louisy in the 6th minute from the penalty spot followed by a Quantus Abbott’s header 24 minutes later to put Aux-Lyons United two goals ahead.

Despite the early deficit Rovers United continued to hang in the game and with their fighting spirit, striker Kerneil Jules scored their lone goal within 2 minutes to half time, taking the score to 2-1 heading to the break.

In the second half both teams continued exhibiting their fighting spirit and in the process created numerous chances. However it was substitute Chris Noël in the 78th minute who sealed the victory for Aux-Lyons United scoring their in the game.

In the finals Survivals Sports Club became EC Global/Mabouya Valley Under – 21 champions for the first time but the victory was not an easy one, as they had to wait until national player Vernon Abbot converted his penalty in a 5 – 3 penalty shoot following an entertaining 2-2 draw after full time, to deny Togetherness Youth their first EC Global Under -21 title.

Togetherness Youth riding on a wave of confidence having not tasted defeat in tournament continued their good form as they took the lead in the 11th minute courtesy of a Dinus David goal, Survivals upped their tempo and quality of play and in the 25th minute national player Vernon Abbott found the equalizer taking the score to 1-1 to the half time whistle.

The second half produced some high quality performances as both teams created numerous opportunities in their quest to seal the victory. However in the 60th minute a goal by Delan Alfred handed Survivals Sports club the lead. But in the 81st minute the tournaments leading goal scorer Clint Avril sent his team’s supporters wild around the perimeter of the field with his 6th goal of the tournament that took the score to 2-2 and the game to a penalty shoot-out where Survivals held their nerves to win 5-3 in the shoot-out.

At the tournament closing ceremony Youth and Sports Council’s President Kendel Emmanuel thanked the EC Global Insurance Company for their continued support towards the development of the Youth in the Mabouya Valley and that the youth and Sports Council looks forward to continue its working relationship with the company as well as all the other entities, clubs, officials and supporters who contributed to the success of the 5th edition of the EC Global/Mabouya Valley U21 Football tournament.