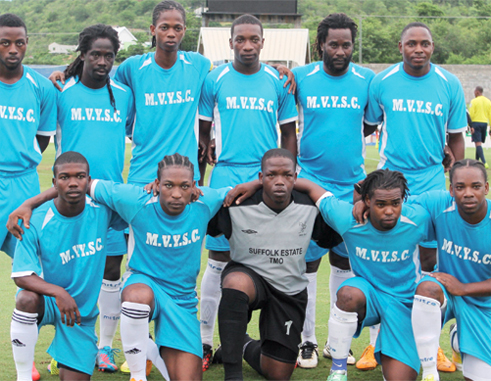 SOUFRIERE that has been dubbed “The Mecca of Football in St.Lucia” by the Parliamentary Representative Harold Dalson will come alive today when the St.Lucia Football Association stages the third place playoff and finals of the Super League Championship.

According to SLFA General Secretary Victor

Reid, the showpiece will kick off from 6:00 p.m. with the third place playoff between Mon Repos and the 2014 Blackheart football champions Canaries, while at 8:00 p.m. Mabouya Valley will take on home team Soufriere in the grand final.

The two teams made it to the final with victories over Canaries and Mon Repos at the Soufriere Mini Stadium.Mabouya Valley had the better of Canaries 5 – 4 in a penalty shoot out after the game ended 1 -1 after regulation time and 2 – 2 after extra time. The only player to miss out on his penalty kick for Canaries was captain Bradley Tisson.

SOUFRIERE edged out Mon Repos 4 – 3 in another penalty shoot out on the evening after the game ended 2 – 2 after regulation time.

By all indications supporters of the four teams in today’s double header will be in a treat and like previous matches played in for the SLC the players are expected to raise their level of play and showcase their full potential on the square. The SLFA in the meantime is appealing to football enthusiasts to come out in their numbers to support the matches.