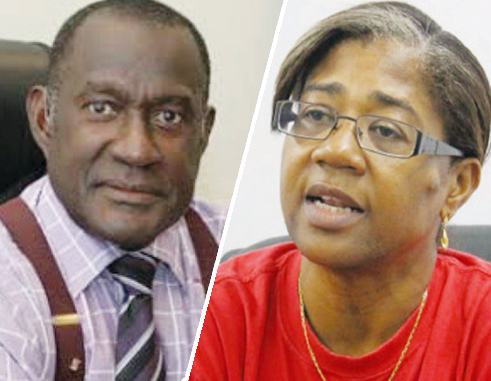 THE feuding between the government and the Civil Service Association (CSA) appears to be intensifying following the butting of heads this week by the government negotiating team (GNT) and the association’s President, Mary Isaac.

The dispute between the two sides, which first appeared in April of this year when Isaac and the other leaders of public sector trade unions unanimously agreed not to rubber stamp any proposal presented to them by the government, remained simmering for eight months.

At first it seemed that the core of the disagreement between the government and the CSA was over the government’s insistence of an adjustment (pay-cut) to the wages and salaries of public workers which it said was necessary to restore the economy on a sustainable path.

Months later and meeting after meeting between the government and trade unions, several of which were boycotted by the CSA, other issues entered the picture one of which was the CSA’s request to meet with the GNT rather than a government sub-committee to discuss the adjustment to wages and salaries and the 2013/2016 Collective Agreement.

The request was granted but the two sides continued to butt heads, despite a statement by the government that the reactivation of the GNT was on condition that the negotiations be completed within two weeks after commencement. That was six months ago.

Last month, trade unions except the CSA, completed negotiations on a three year collective agreement (2013/2016) with the government and presented proposals to government on what can be done to deal with the country’s fiscal deficit without cutting by five percent the salaries and wages of government employees.

This week the situation between the GNT and the CSA worsened with the chairman of the GNT taking to the airwaves to voice his disappointment with the CSA. Isaac, undaunted fired back.

Chairman, Chester Hinkson, in an unprecedented move told media personnel that the GNT was appalled by statements made by Isaac in an article dated November 24, 2014 on the St. Lucia News Online website regarding the minutes of meetings and the negotiations of fringe benefits and salaries.

According to Hinkson at a meeting of October 9, 2014 the CSA requested that fringe benefits (allowances) be negotiated together with wages and salaries. However, although it was not the practice to negotiate allowances with salaries, the GNT accommodated the CSA by acceding to its request. He said that at that meeting the GNT had indicated the severe financial constraints of the government and the difficulty in negotiating positions which resulted in higher financial outlays, and that both parties agreed that the CSA would go back to its members to inform them of the seriousness of the country’s financial situation.

He encouraged the CSA to come to the bargaining table to conclude negotiations in the interest of the country, noting that a meeting between the GNT and the CSA which was scheduled for last Monday was cancelled by the CSA, something Isaac denied claiming that she was not the CSA and that the CSA had a negotiating team some of whom were at the meeting that Hinkson said was cancelled by the CSA.

Isaac said that no one contacted her regarding the scheduled meeting of last Monday. She said that someone from the GNT called her last week in respect of last Monday’s meetin. However this was not the way informing her about a meeting should be done.

Calling her, she said is not the norm.

“We have a system in place where you email the CSA about a meeting then you follow up with a phone call to the general secretary of the CSA,” Isaac said.

Hinkson said that it was the President of the CSA, in a telephone conversation, who cancelled the meeting indicating that the CSA was in no hurry to conclude the negotiations and that the CSA would not be meeting with the GNT until 2015.Further, that two of the seven members of the CSA’s executive would be undergoing medical treatment during the Christmas holidays.

Prime Minister Dr. Kenny Anthony called the recent disengagement between the GNT and the CSA as ‘alarming’. He also called the delay to conclude negotiations with the CSA as ‘very costly’.

“I urge members of the CSA to examine this situation and determine whether that situation is in their interest or in the interest of the country as a whole,” the Prime Minister said.